Apple’s recent release of iOS 9.2.1 should be common knowledge by now. The latest firmware update for the iPhone, iPad, and iPod touch has been installed on devices across the world over the last few days with individuals taking the opportunity to upgrade and take advantage of iOS’ latest improvements and enhancements. Whenever a new version is released, the question on everyone’s lips is always the same; is it worth upgrading and how will the latest firmware effect the performance of my device? A new set of speed comparison videos have emerged to answer that question, and show that iOS 9.2.1 is a definitive improvement over iOS 9.2 on pretty much all compatible devices.

There’s been some great expectations for the final version of iOS 9.2.1. We may currently be in a pre-release stage for iOS 9.3, but the beta seeds of 9.2.1 showed definite improvement and gave a lot of users hope that there would be some noticeable improvements in terms of speed and performance on their devices. Especially those who may still be rocking older hardware, such as Apple’s 32-bit iPhone 4s. The good news is that the videos and overall analysis clearly shows that Apple has made some real-world improvements with the release of iOS 9.2.1, much to the delight of those who are utilizing older devices. 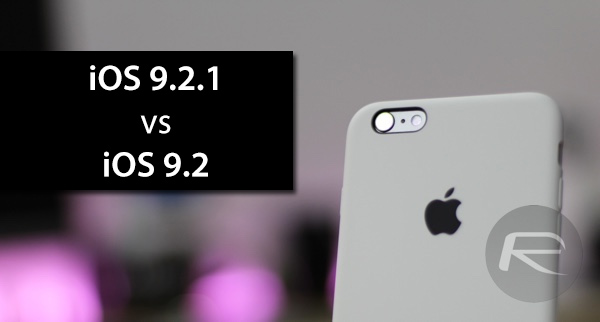 The comparison of iOS 9.2.1 versus iOS 9.2 on the iPhone 4s, iPhone 5, iPhone 5s, and iPhone 6 clearly shows that the upgrade is worth it if you’ve been having some performance issues with previous versions of iOS. One of the most exciting aspects is the fact that the performance and speed increases are actually most noticeable on the iPhone 4s and iPhone 5 with the 32-bit CPUs. Improvements can be seen in the more modern devices too, but the improvement is clearly distributed where it was needed the most. Considering Apple is currently defending a class action lawsuit against performance of iOS 9 on the iPhone 4s, so this improvement will be greatly appreciated.

All in all, it looks as though the upgrade to iOS 9.2.1 is definitely worth doing regardless of the device you’re using. If you happen to be jailbroken on 9.0-9.0.2 then you will want to stay away from it for obvious reasons.

Check out the videos of the devices in question for yourself below.