iOS 11.1 release date will likely coincide with iPhone X launch in November this year. Here’s the reason as to why.

Apple’s iPhone X is not due to arrive in stores for over a month but it is showing up in reports generated by benchmarking tool Geekbench, and as you would expect it’s scoring highly, very highly indeed.

We have already seen an iPhone 10,5 pop up in the reports and now a new device is also appearing, complete with a 6-core ARM CPU and 3GB of RAM. Right now we know of two devices that match that description, the iPhone 8 and iPhone X and seeing as we know the iPhone 8 is actually iPhone 10,5, the new device which is labelled as iPhone 10,6 must be something else. It does not take a genius to be able to work out that this is indeed the iPhone X.

That along is mildly interesting, and not because of the sighting itself. With the iPhone X set to arrive November 3rd, it stands to reason that the new Apple flagship would be in testing both inside and outside of Apple, but what really catches the eye is the software that iPhone 10,6 reportedly runs. According to the report generated by Geekbench, the phone being tested runs iOS 11.1, and is the first time that we have seen such a version number mentioned. You can see it in the screenshot below: 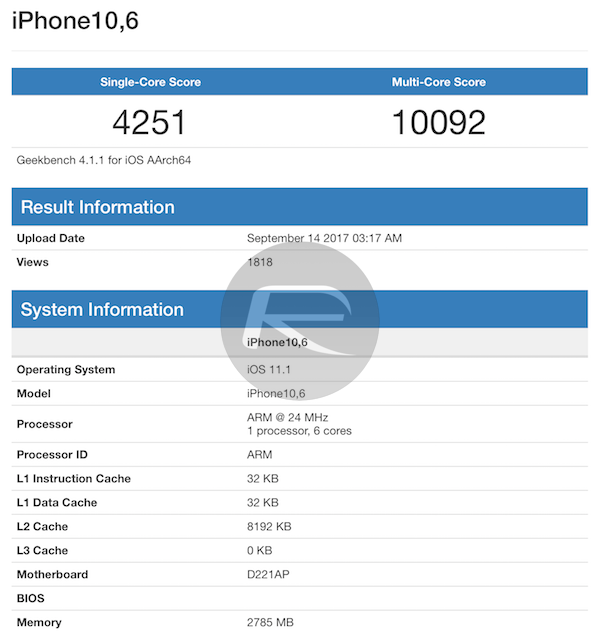 We know that Apple will ship iPhone 8 and iPhone 8 Plus with iOS 11.0 installed, which makes plenty of sense. The software is nearing the end of a lengthy beta process and it will be made available to all users on Tuesday, September 19. The iPhone X will not ship for over a month though, and this latest news would suggest that iOS 11.1 will be ready for everyone ahead of the phone’s November 3rd’s debut. We obviously do not know what iOS 11.1 will entail, but it is a safe bet that it will bring Apple’s newly announced Face ID, amongst other features, for the first time.