In case you don’t already know, iOS 10.0.2 is out already. Here’s its full official changelog showing everything that is new in this release.

If you’ve just been alerted to the availability of iOS 10.0.2, or have already downloaded it to your iPhone, iPad or iPod touch, then you may be interested to know exactly what’s been changed with this latest version. To keep you in the loop, we have the full changelog, or release notes as some like to refer to them as, for iOS 10.0.2 that Apple has just released to the public for compatible devices. Unlike iOS 10 / 10.0.1 which introduced an almost endless list of changes, improvements and functionality additions, today’s iOS 10.0.2 release is somewhat a more, low key affair. 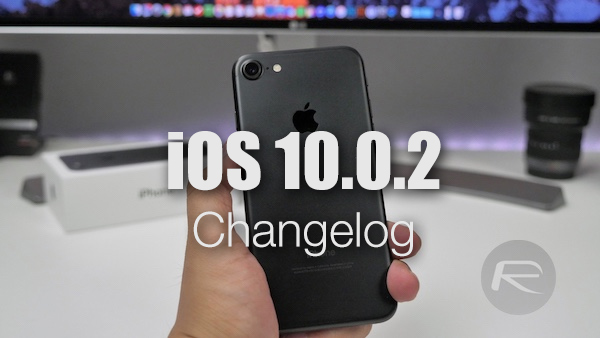 In fact, it feels a little depressing to actually say it, but after the excitement that came attached when iOS 10 / 10.0.1 released officially last week, today’s iOS 10.0.2 release contains the expected, but still very important, obligatory bug fixes and security enhancements that generally make up any point release of this nature.

Apple has taken the opportunity to address and fix an issue related to audio controls for currently playing music. It seems that the Cupertino-based company had identified an issue related to Lightning headphones in iPhone 7 and iPhone 7 Plus that would sometimes prevent those audio controls from working. Today’s iOS 10.0.2 release also includes a number of bug fixes that will appease users who have been suffering at the hands of an iCloud Photo Library issue which would crash Photos app when trying to turn iCloud Photo Library on.

Apple has also fixed an issue that prevented some device owners from enabling desired app extensions to enhance the iOS experience. The full iOS 10.0.2 changelog as described by Apple is as follows:

Apple is also pointing users at a dedicated security update page for the content of today’s iOS 10.0.2 release. When going to that page however, the company expresses that today’s update “includes the security content of iOS 10.0.1”, which essentially means that as far as security content goes, there’s no change in iOS 10.0.2. What this also means is that all those jailbreak demos that we saw recently for iOS 10.0.1 should work on iOS 10.0.2 as well.

With iOS 10.0.2 officially available, and iOS 10.1 already in beta, it’s clear that Apple is looking to progress iOS 10 as quickly and as efficiently as possible.