Over the course of Apple distributing iOS 11 beta seeds, we have already learned that the Cupertino-based company has made significant improvements in how storage space is handled in comparison to earlier versions of the firmware, but it now seems that additional efficiencies have been made with the latest beta.

Storage space, or the lack there of, is always a hot topic of discussion for smartphone owners. Talking about just how much space is left on a device and how much space the installation of iOS takes up, is right up there with concerns about battery life and power performance in order of importance for consumers.

Apple has been taking a lot of praise over the last few months for really going to town on how much space iOS 11 takes up, resulting in consumers getting back some of that precious internal capacity on their devices. We’re pleased to see that iOS 11 beta 7 / public beta 6 continues that focus on internal efficiency.

Our own internal tests have shown that installing the aforementioned latest beta could free up around the 1GB of internal storage space on the device, which essentially means that the owner of that device will have all of that glorious extra space to store their own files, photos, and music, rather than handing it over to the system to gobble up. There’s no additional work to do on the user’s part other than going through the process of downloading the latest beta release as an over-the-air update. iOS 11 then does all of the heavy lifting by managing its own internal files to claw back space on behalf of the device owner. 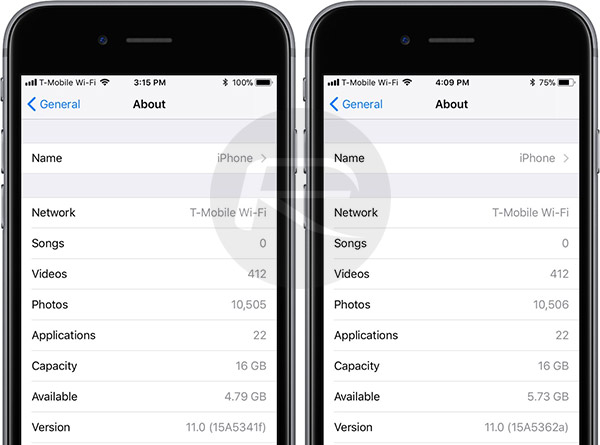 As with any previous coverage of this new-found capacity saving, your mileage will ultimately vary on type on iOS device being used as well as total storage capacity of the device. The higher the capacity, the more storage space you are likely to get back when updating to this latest beta seed.

If you are still to go through the upgrade, then make sure you make a note of just how much free space you have before you upgrade to the latest beta. You can easily do this by checking out our guide on that subject here: New In iOS 11: Check How Much Storage System Takes Up On The Device.