Install Any Version of Windows 7 with Universal ISO

Those of you who own an official copy of Windows 7 from MSDN or TechNet may have faced a scenario where you wanted to install a different edition of Windows, only to find out that you will have to download a separate ISO file just to install your desired edition. Windows Vista had one ISO file installer for all the different edition of Windows. But with Windows 7, Microsoft changed this approach and started offering separate ISO files for each edition (Starter, Home Premium, Professional and Ultimate) of Windows. This creates an unnecessary strain on bandwidth when downloading, wastes space when archiving, and wastes time in general. 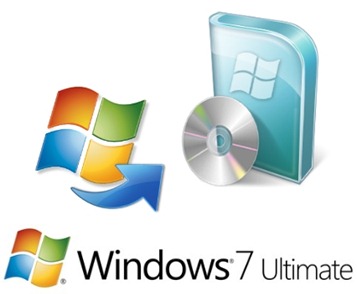 Unlike Windows Vista, Windows 7 is no longer "One Disc To Rule Them All", which presents challenges to people who are downloading multiple editions from their MSDN or TechNet subscriptions, and for people who want to backup and archive their ISOs, because instead of just two disc images–one each for 32-bit and 64-bit–there are now eight different images.

If you own a Windows 7 Home Premium edition and want to convert it to Windows 7 Ultimate to enjoy all privileges, this tool comes out as an ideal solution and eliminates the need to have a separate ISO files for the desired edition.

This tool is even more useful. It converts your existing ISO file into a universal installer file. With the resultant universal installer, you get the freedom to choose which version you want to install during Windows 7 setup, and eliminates the need to keep separate files for separate Windows 7 edition.

The ei.cfg Removal Utility removes the ei.cfg from any Windows 7 ISO disc image, which converts the image into a universal disc. This tool eliminates the need for unpacking and rebuilding the ISO. It does so by toggling the deletion bit in the UDF file table. This excellent utility is super fast as it takes only fraction of a second to remove the ei.cfg file.

Another plus point of this useful utility is that you can always reverse/restore your universal file to the original edition.

Step 1: Run binpatch.exe
Step 2: Select the patch for the target edition that you want.
Step 3: Select the ISO disc image that you want to convert from.
Step 4: After patching, you should verify the SHA-1 hash of the final file and compare that with Microsoft’s official hash to verify that the patch was successfully completed. 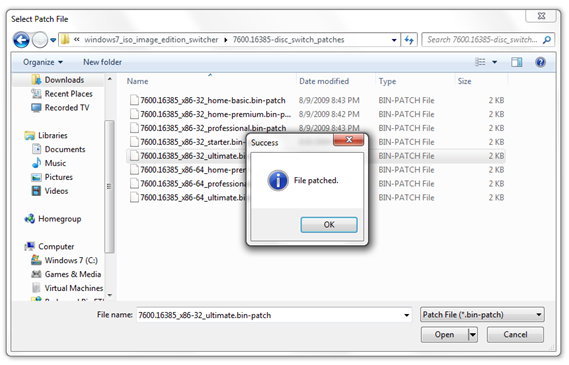