The iPhone Dev-Team has finally released a proper working patch which fixes carrier name or logo on unlocked iPhone 3.1.2 firmware. If you jailbreaked your iPhone with PwnageTool 3.1.4 and then later unlocked it with ultrasn0w, then you must have noticed that the carrier name or logo on the top left side of the status bar was missing. This was caused due to a known bug in ultrasn0w and was purely cosmetic, which means that your phone continued to work even without the carrier logo in place. We earlier wrote about a fix for this bug but it was more of a workaround than a proper fix. But today, Dev-Team has released ultrasn0w 0.92 which fixes this issue. Follow the steps below to upgrade your phone to the latest version of ultrasn0w. 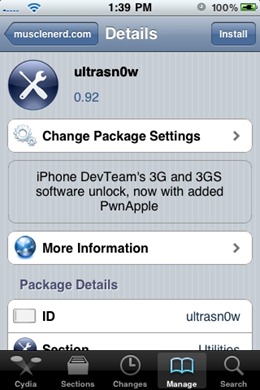 Step 1: Start “Cydia” on your iPhone and touch on “Manage” tab on the bottom. Now touch on “Sources” as seen in the screenshot below: 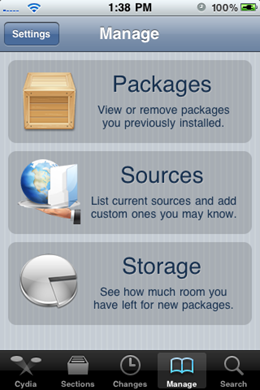 Step 2: Touch on “Edit” and then on “Add”. You will be prompted to enter a url source as seen in the screenshot below. Type “http://musclenerd.com” and touch on “Add Source”. 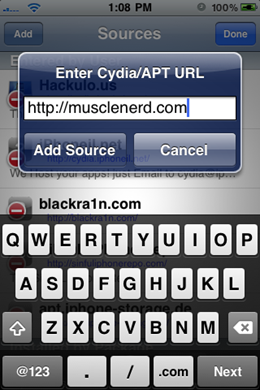 Step 3: Once the repository has been added successfully, Search for “ultrasn0w” in Cydia and install this application. The latest version 0.92 of this app will automatically unlock your iPhone so that you can use it with any carrier with proper carrier name/logo.

Those of you who already have the older version of ultrasn0w installed should simply touch on “Modify” button on the top right, followed by “Upgrade” button as can be seen in the screenshot below: 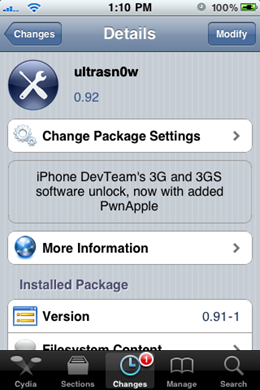 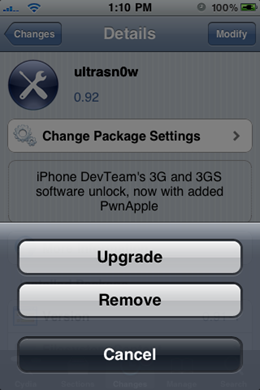 Step 4: Now simply restart your iPhone. Voila! You should now have a fully unlocked iPhone on firmware 3.1.2 with proper name or logo for your carrier!

ultrasn0w 0.92 will be later moved to http://repo666.ultrasn0w.com repository. Search for it on repo666 if you cant find it in musclenerd’s repo.

You may also like to take a look at the following guides:

Feel free to ask me any questions here should you run into any problems when unlocking your iPhone with ultrasn0w 0.92.