With its large size 4.3-inches multi-touch screen, 1 Ghz Snapdragon processor and other amazing specs, HTC HD2, atleast in terms of hardware power has already bulldozed its contemporaries devices and is by now surely a big powerhouse in cellular world. We had tried to keep our readers updated during the entire course of its development phase through our various posts. Just to refresh your memory, HTC HD2 is powered by Microsoft’s newly released Windows Mobile 6.5 and is the first Windows phone to feature multi-touch support through HTC Sense (aka HTC TouchFLO 3D 2.5). 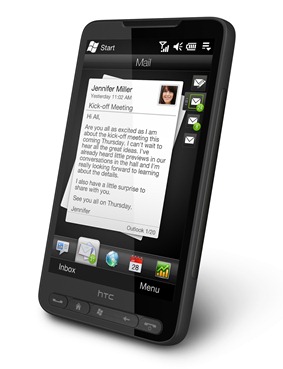 HDBlog.it (via WMPoweruser) has released two new video demos of the new HTC HD2 running Digital Compass and GPS Navigation through TomTom/CoPilot and Google Maps respectively. The video demo gives a decent idea on how the built-in GPS and Compass in HD2 work on these two apps which has already been envisaged and described in our earlier post here.

This video demo takes HD2 on a ride in the car with both the TomTom and CoPilot apps to show the GPS capability of the device. It fixes its real time position with the help of built-in GPS sensor. GPS seems to behave better with CoPilot than with TomTom for precision and fluidity. In addition to this, it successfully demonstrates multi-touch functionality which is supported in both the apps along with automatically changing of color depending on time of the day. The massive size of the screen makes it a perfect portable turn by turn navigational device for your car. One flaw which has been observed/ in the video is that the GPS slightly lags several seconds behind the actual motion of the car in real time-frame. This may be attributed to the accuracy of the GPS which is still supposed to be within +/- 400 meters. Overall an impressive video.

Digital Compass in Action via Google Maps on HD2

The following video demo shows HD2’s onboard Digital Compass in action using Google Maps app. Unfortunately the video is of short duration and not of the best quality. It demonstrates marking of a position on the map using the built-in Google Maps app and then shows how HD2 helps to navigate you back to the this originally marked position using a combination of the built-in Digital Compass and GPS.