It seems that events and announcement from major consumer technology companies – specifically those involved in the smartphone industry – are very much like London buses, that you wait patiently for one to arrive and end up getting three at once. Well actually, in this case, all the announcements are spread out over the month of September, it seems like an extremely good time to be a mobile device aficionado.

The next couple of days should see the likes of Amazon, Nokia and Microsoft all taking to their own respective events to announce what they have in store for us going forward. The Kindle Fire 2, Lumia 920 and Razr HD are all likely to play a part in whatever the individual companies announce, and that represents enough technology-based candy to have even the most laid back person salivating. Of course, we can’t forget the fact that we have just had the official invitations from Apple for their event on September 12th, and while we could spend days investigating the intricacies and hidden meanings in their invitation, let’s just say we are sure to welcome a new iPhone into our lives.

Not wanting to be left out of the press event bubble, Taiwanese based HTC has also signaled their intention to make some announcements this month by inviting certain press outlets to their own event on September 19th, just seven days after Apple’s event and two days before the speculated new iPhone release date. The event will be held in New York City and informs delegates that they will be joining the company to see "what’s next". I’m pretty sure that the Apple invitation will be getting a lot more attention and scrutiny over the next few days than the HTC one, but it really is pretty self explanatory apart from the curious little Metro-esque semi-circle at the bottom of the document leading some to believe the event could have a Windows Phone 8 tinge to it. 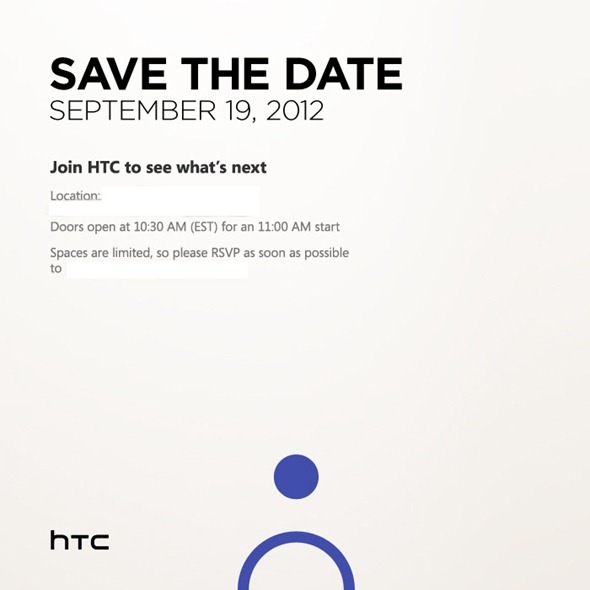 The event could coincide with the rumors that have been flying around the internet about some new HTC Windows Phone 8 smartphones, reportedly due for release sometime during November. New Windows Phone 8 HTC handsets, new Nokia Lumia on the way, as well as a new iOS powerhouse about to be announced, this is certainly shaping up to be a great couple of months.