The last few revision of iOS have seen many big features arrive to the scene, but one of the quieter entries, if you’ll forgive the pun, is the Do Not Disturb utility with iOS 6. Now, something similar has arrived over at the Windows Phone Store in the form of an app called Quiet Hours, allowing you to readily prevent your device from bothering you when you’re asleep, in a meeting, or other formal or informal event where discretion is paramount.

Quiet Hours, developed by Los Angeles, California-based company Amaze Pictures, is both simple and practical, doing exactly what it says in the description. You can readily schedule when you would like silent mode to be active or disabled, and there are a number of ways you can go about this. For example, if you want to be organized, you can go into the app itself and input the specific times you’d like silent mode to work its magic. Alternatively, you can toggle the Live Tile on the Start Screen, which is rather convenient if time happens to be of the essence.

Quiet Hours is free to download and install, although you will have to pony up a small fee for the full app, which includes the marquee feature of the scheduler.

Despite the fact that these sorts of apps are designed to be minimalistic, one cannot help but feel that Quiet Hours would benefit from one or two enhancements. The scheduler, for example, could be a little more advanced for those who like to be meticulous, and a whitelist for accepted contacts – even during a scheduled quiet moment – would also be more than welcome. 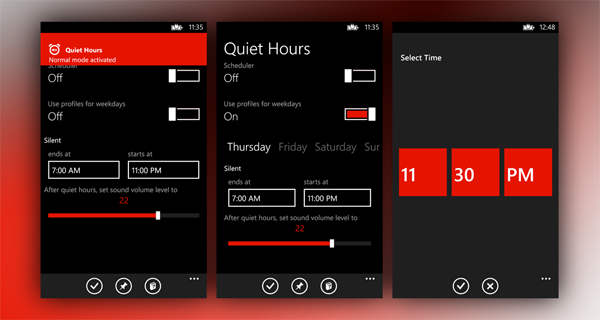 Still, for those on Windows Phone that have been waiting in the hope of an alternative to the iOS Do Not Disturb feature, it’s finally here, and you can test it out by downloading via the direct link provided below.

Hopefully, in due course, this app will realize its potential, but even now, is definitely worth picking up — particularly with such apps being a scarce commodity over at the WP Store right now.