How To Enable Native iOS 8 Quick Reply For WhatsApp Messenger

WhatsApp, which was famously acquired by Facebook last year, is among the most popular cross-platform chat apps. Used by hundreds of millions, a large portion of WhatsAppers are connected via Apple’s iOS, and while the app is more than fit for purpose, it does have its fair dose of limitations. As ever, the jailbreak community has delivered a tweak that pushes the capabilities of WhatsApp beyond the basic, bringing a quick-reply feature to the fore. Further details, as well as information on where to find this tweak, can be seen after the fold.

iOS has long been lacking in so many areas, and while this remains the case, iOS 8 brought a few crumbs of comfort. Notably, users can reply to correspondence through Messages without having to jump into the app directly, which is much more convenient and promotes general fluidity. Apple has limited this feature to its Messages app only, so if you wish to quickly reply to a message from a third-party app like WhatsApp, you must open up the app and take the long route, but a new beta tweak hopes to cut out the proverbial middleman and enable native Quick Reply for WhatsApp.

It’s called Nuntius, and because it’s still in beta, it’s not yet the finished article. In fact, having given it a whirl for ourselves, it is rather buggy at this stage, and one key prerequisite is that you’ll have to have the app running / backgrounded in order for the tweak to work. But it gets the job done and will let you reply to banner notifications in a seamless manner akin to Messages in iOS 8. 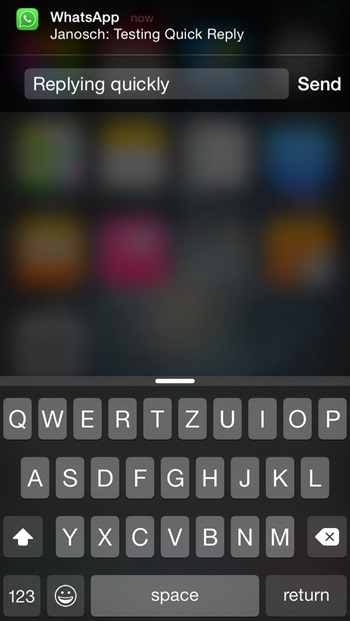 To test out Nuntius, add the repository http://sharedroutine.com/repo/ in Cydia, download and install. As we say, it’s not exactly a perfect solution, particularly given the lack of lock screen notification support, but it’s a step in the right direction. Hopefully, in time, WhatsApp and many other IM apps will be able to offer substantial quick-reply in iOS.

If you’re looking to add the quick reply feature for Kik Messeger, Facebook Messenger and LINE, then you definitely want to check out IMN for iOS 8 tweak.