You would need to have been living in a big hole in a big desert in the middle of nowhere to have been able to miss the fact that Apple is currently taking a battering for the way it slows down certain older iPhones in an attempt to preserve their batteries and in some cases prevent them from shutting down completely.

The fact that Apple’s reasons for doing this make plenty of sense hasn’t stopped the world from losing its head over the matter, helped in no small part by the way Apple made a complete hash of communicating its intentions.

While Apple has said that it will add a software feature this year that will tell iPhone owners when their devices are being artificially crippled, some people don’t want to wait that long. So, exactly how do you check if your iPhone’s CPU is being throttled? We’re glad you asked! It’s actually really rather simple and just involves downloading an app from the App Store and then comparing how fast your iPhone is running against how fast we know its CPU can run when being allowed to. Let’s take a look.

Step 1: Head on over to the App Store and download “Lirum Device Info Lite”. It’s available as a free download.

Step 2: Launch the app and tap the options button at the top-left of the screen followed by This Device.

Step 4: Towards the bottom of the information you can now see, you will spot two metrics. One is how fast the iPhone’s CPU is running now, and the other is how fast it can run at its maximum clock speed. You want both numbers to be identical, or almost identical. 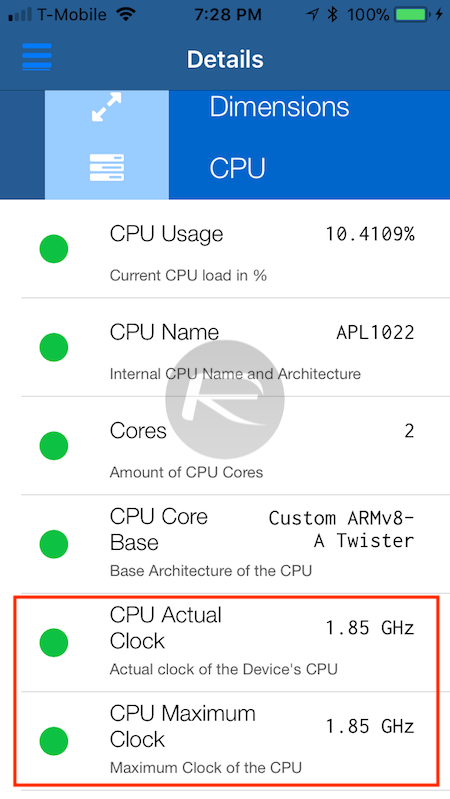 Step 5: If those numbers are different, then your iPhone is being throttled. That can happen if your iPhone is too warm or is in Low Power Mode, but if neither of those things are true, then you may want to look at getting your iPhone’s battery replaced.

Oh, and we’ve outlined exactly how to do that very recently, right here: How To Get iPhone Battery Replaced For $29 From Apple Right Now.

Also worth checking out: How To Check iPhone Battery Health To Determine A Replacement For Speed Boost And Greater Battery Life.