Apple’s admittance that it slows iPhones down if their batteries are incapable of powering an iPhone at full speed should have come as no great surprise – it said it was doing it via a software update long before the recent furore started – but that has not stopped the world from losing its head over the past week or so.

Now, after releasing an apology over the matter and admitting that it did not make users aware as fully as it should have, Apple is now having to deal with a customer backlash the likes of which it may struggle to recover from for some time.

Seemingly keen to pile on, United States Sen. Marco Rubio has taken to Twitter to label the company as “arrogant.” In his tweet, Rubio said that the “problem isn’t just phone [sic].It’s arrogance of Apple. Remotely control how phones work & admit only after getting caught,” while also linking to a Washington Post article on the subject.

There have already been numerous lawsuits filed against Apple over its slowing down of old iPhones, and while its motives appear pure, there is no doubting that the way the move was communicated leaves plenty to be desired.

If Apple had, for example, offered up an on-screen warning ahead of throttling an iPhone’s performance, then things may have been a lot clearer from the off but the company is now stuck firefighting at a time when it should be basking in the glory of huge holiday sales. 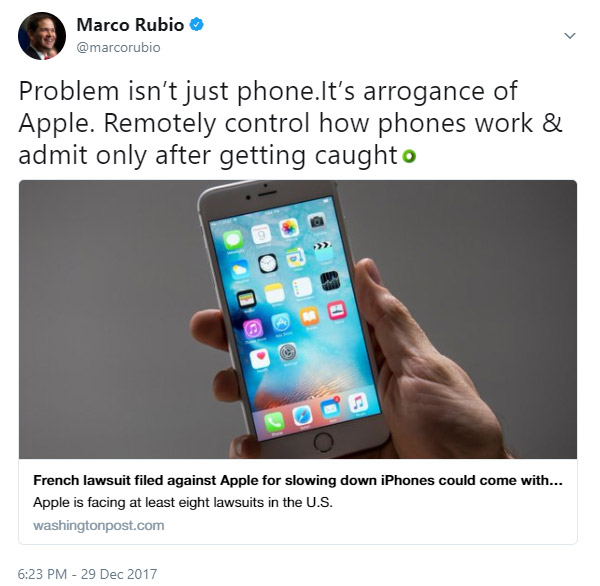