After years and years of rumors about Apple throttling older iPhones performance, the company recently admitted that it was doing it on purpose since the release of iOS 10.2.1 due to battery degradation and unexpected shutdown issue in the best interest of consumers.

That obviously sparked controversy. Apple today has issued an apology for not being clear on what it was doing, offers compensation to its customers, and explains what to expect regarding this issue in future.

First of all, Apple says that consumers need to understand that the company didn’t do this on purpose to sell its newer phones, but rather to make older iPhones last as long as possible. In a post titled “A Message to Our Customers about iPhone Batteries and Performance”, the company states that:

We’ve been hearing feedback from our customers about the way we handle performance for iPhones with older batteries and how we have communicated that process. We know that some of you feel Apple has let you down. We apologize. There’s been a lot of misunderstanding about this issue, so we would like to clarify and let you know about some changes we’re making.

First and foremost, we have never — and would never — do anything to intentionally shorten the life of any Apple product, or degrade the user experience to drive customer upgrades. Our goal has always been to create products that our customers love, and making iPhones last as long as possible is an important part of that.

The article then goes about explaining how lithium ion batteries age, before going into explaining unexpected shutdown issue and what the company has done to tackle it starting from iOS 10.2.1. 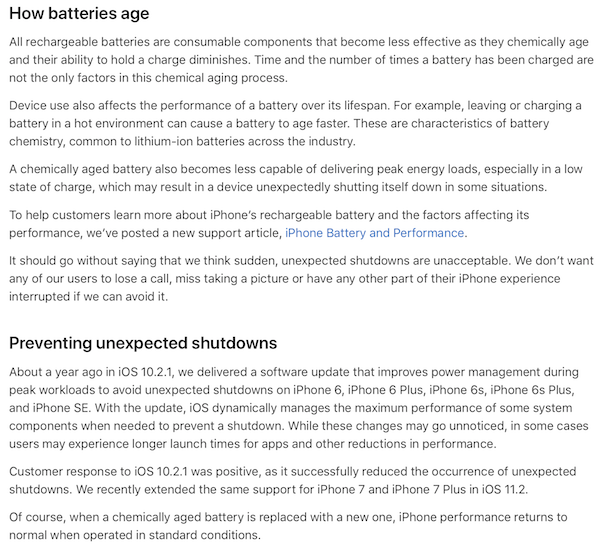 Since Apple hasn’t been very clear about it, they are now offering $29 battery replacements instead of regular $79 for out-of-warranty iPhone 6 and up starting late January. This offer will be valid worldwide and for up to a year starting from late January 2018. 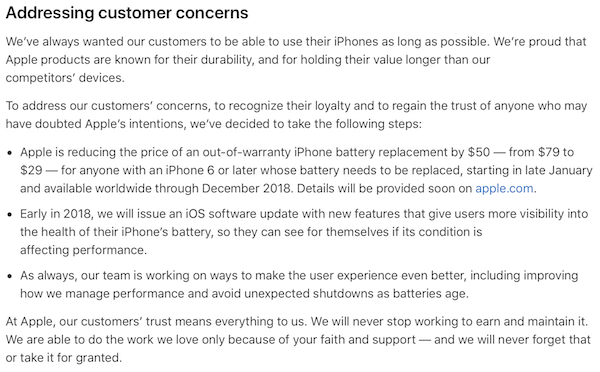 Apple will also be releasing a software update in early 2018 which will add more transparency and details about a device’s battery health.