Few days have passed since a number of jailbreak tools were updated or released offering support for various device types running various versions of iOS.

Now, as part of an effort to keep lines of communication open, some of those tool creators have taken to social media to clarify a number of areas of contention and to clear up some of the misguided speculation which has been echoing around the community.

First of all, Jonathan Levin, author, and creator of the LiberiOS iOS 11.1.2 jailbreak and QiLin Jailbreak Toolkit has taken to Twitter to shed some light on the current state of Cydia on iOS 11 and his attempts at communicating with saurik. Levin has Tweeted that he has contacted saurik approximately four days ago regarding Cydia compatibility for iOS 11 in LiberiOS, but saurik hasn’t responded to him as yet.

Attention #cydia lovers: 4 days later @saurik hasn’t dignified me with a reply, but word is he’s working with @coolstarorg. Therefore please wait for his JB for #cydia. #LiberiOS & #QiLin remain a full (and now even more stable) jb/toolkit, but hereby reclassified as dev only.

Levin has also expressed his belief that saurik is likely working with CoolStar to bring iOS 11 compatibility to Cydia, and has advised jailbreakers to wait until that that is released if they want Cydia and Substrate support. CoolStar though has since responded saying he isn’t working with saurik:

He is not working with me either. Other than a few initial replies on Reddit I have not heard from him since…

If recent user feedback is anything to go by, iOS 11.1.x LiberiOS is now a rock solid jailbreak after the recent v11.0.1 update, which means you can use it to jailbreak now and install Cydia whenever it’s updated and made available for iOS 11 by saurik.

Moving on to 10.3.x jailbreak side, we already have a jailbreak for 32-bit devices thanks to h3lix, but 64-bit jailbreak on iOS 10.3.3 is still being worked on by multiple developers, and Ben Sparkes happens to be one of them. He has now shown off a screenshot of Cydia running on an iPhone 7 with iOS 10.3.1 installed, which means his 64-bit jailbreak with Cydia is looking like a real possibility now. There’s no word yet on Substrate support but it looks as though the pieces are falling together nicely for a public release. 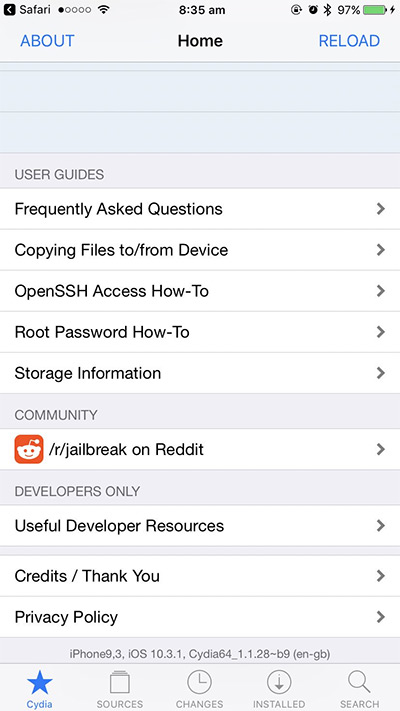 Last but not the least, another developer who goes by the name of @Pwn20wnd on Twitter is claiming to have an iOS 10.x.y jailbreak done and ready for 64-bit devices. He is said to be currently putting together the tool which would be installed on devices to execute the jailbreak.

So the 10.x.y jailbreak is done. Just getting the tool done. Please be patient. ETA: A week.

He has also given an ETA of one week for the jailbreak’s arrival. So, if all of the above is accurate, then it seems that things are still ticking along nicely for a public 64-bit iOS 10.3.3 jailbreak.

As always, we will be sure to let you know of any additional developments in the jailbreak scene. Stay tuned for more.