How To Add A Stopwatch To iOS Lock Screen On iPhone

If you have ever been in a situation where you’ve needed to time something, or see how long it takes a friend to perform a certain task, the taking out your iPhone, launching the Clock app and jumping into the Stopwatch time is in itself a time consuming task. Granted, this may have only happened to an extremely small subset of iOS users, but a problem solved is still a problem solved, and thankfully, this niche problematic situation has been eradicated for jailbroken users thanks to the Stoppur tweak.

Stoppur is another one of those packages that takes a specific part of Apple’s iOS and puts it front and center so it is easily accessible by users. On a personal level, I rarely use the Clock app on the device. My internal body clock wakes me up in the morning, so I don’t need the alarm, and the time is on my lock screen and status bar. I do however, use it occasionally to look at different time zones of clients in other countries, but I always forget it even has a stopwatch option. 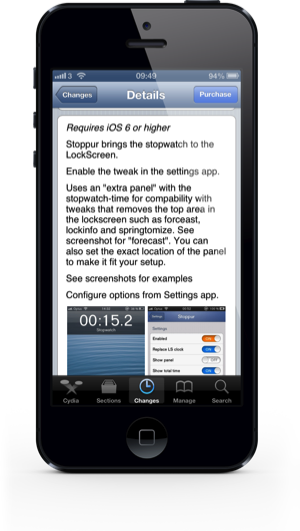 When the Stoppur tweak has been installed, a simple on or off toggle can be found in the native Settings app to enable or disable the package. Additional options include being able to entirely replace the clock area on the lock screen as well as being able to show the total accounted time rather than individual lap times. The developer of the package also went through trouble of embedding the stopwatch in its own panel, which is quite a clever idea, considering other installed tweaks sometimes entirely change how the lock screen operates. 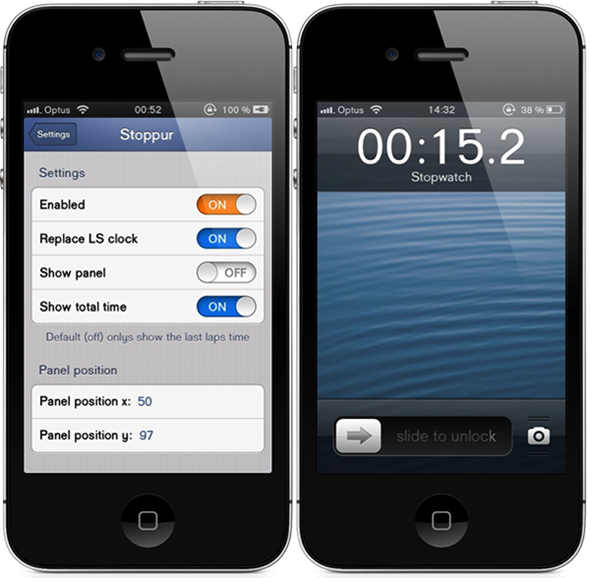 As part of the setup process, users can manually specify an x and y co-ordinate position on the device for the panel to be overlaid, meaning that additional power of how it looks is granted to the user. Other than that, the tweak does exactly as it says on the tin. It’s a stopwatch, it’s on the lock screen and it’s available to download now.

Stoppur is available as a $0.99 download from the BigBoss repository and requires a jailbroken device running iOS 6.0 or above.