How Control Center In iOS 10 Should Work [Video]

There’s a good four months or so left until we get our first glimpse at what Apple has in store for us with the next-generation of iOS. Apple historically utilizes the fact that it has many thousands of developers all on once place during its annual Worldwide Developer Conference (WWDC) to show off the first beta version of the next major version of iOS, which in this case, will be iOS 10. While nobody knows for sure what will be included with that release, but what we can do is imagine and conceptualize what could be included with that release, and that is exactly what we have here in this ‘Advanced Control Center’ concept for iOS 10.

Control Center has been a fairly central part of the iOS experience in recent years. Having the ability to quickly access commonly used controls and system settings has been something that has really resonated with iPhone and iPad owners. Apple has also already shown its hand by adding additional toggles like Night Shift to Control Center as part of the ongoing iOS 9.3 pre-release seeds, meaning that it definitely has a future going forward. The conceptualized Control Center takes an interesting turn by integrating Apple’s pressure sensitive 3D Touch functionality into it. 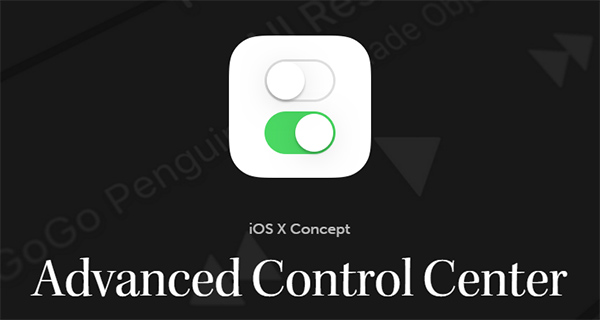 There’s also an element of customization introduced into the Control Center experience. The video shows off the ability to replace system toggles and calls to action that are rarely utilized with ones that a user interacts with on more common basis. There’s also the ability to keep toggles in Control Center, but to rearrange them to make those more-frequently accessed toggles more prominent on the display. In terms of customization, there’s also the addition of a system dark mode that takes the whole experience to an unprecedented level of visual excellence.

With all that in mind, one of the more interesting ideas of the integration of 3D Touch is that it would allow the user to bring up a range of contextual Quick Actions menu by invoking a force tap on one of the toggles within Control Center. As an example, when pressing hard on the Wi-Fi toggle, the user would be presented with a set of options, including “Turn Wi-Fi On/Off”, and a list of available networks that have been found already. It’s certainly an interesting concept and definitely sets the tone for the launch of iOS 10.

You can watch it in action in the video embedded below.