Google Sends Out Invites For Android Event On October 29th

We were expecting this announcement to pop up at some point this month, and just like clockwork, Google has sent out invites for an Android event which is going to be held in New York on October 29th.

Although the details regarding the event itself from the face of the invitation seem scarce, but considering that this is an Android event, therefore it’s a no-brainer to believe that it will focus itself entirely around Android related announcements. 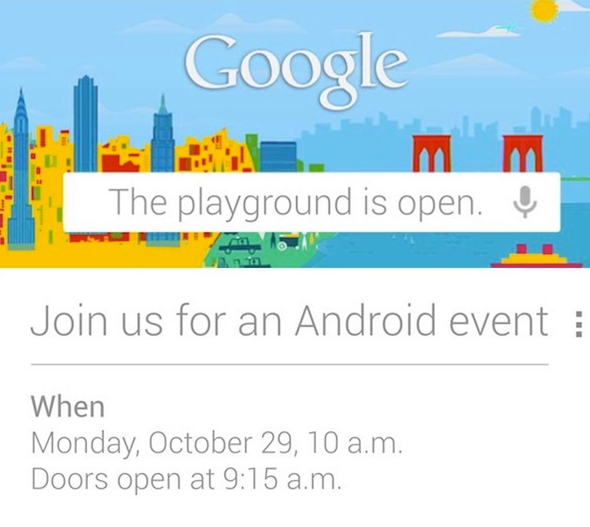 There are a bunch of things we are looking forward to from this event, and to start things off, we believe that Google will perhaps take the wraps off their next iteration of Android, which is version 4.2 (Key Lime Pie?), and in typical Google fashion; will be thoroughly detailed on-stage.

Just like Android 4.1 Jelly Bean, it’s rumored that Android 4.2 won’t be a giant leap in terms of features and will focus mainly on ironing out bugs which users have been facing for a long time, for example: better battery life with Project Roadrunner etc.

It’s also rumored that Google will (finally) announce the 32GB model of their much-loved Nexus 7 tablet, and along with that; the 8GB model will get the boot and won’t be available as a base option. If we’re lucky enough, Google might just surprise us with a $99 Nexus 7, who knows!

Speaking of the Nexus; it’s highly likely that Google will announce their next flagship Nexus smartphone at this event, which will be powered by the latest version of Android that will be announced at the very same venue. It’s unclear at this point if Google is just planning to unveil an upgraded Galaxy Nexus II with beefed up specs, or are planning to take things up a notch by announcing a bunch of Nexus devices manufactured in collaboration with different OEMs. We’ve seen leaked photos of the LG Nexus 4 lately, and also the Nexus X manufactured by Sony, therefore it’s uncertain at this point if Google has a few rabbits under its hat or not.

Whatever the case might be, all the rumors will be laid to rest on October 29th, hence, save the date in your calendar, and in case you do miss the event; we will, as usual, cover it in great detail here at Redmond Pie.