Google Play Is The New Android Market, One Hub For All Your Movies, Music, Apps & Games [VIDEO]

In a timely announcement on the eve of Apple’s big media event, Google has really wrung the changes to its online content-selling infrastructure – know hitherto as the Android Market.

In order to adequately reflect changes and new content to the store, the Big G has changed the name to Google Play with immediate effect. When first launched, it sold apps, but Google has now added books, movies, and music to the equation in order to keep up with rivals Apple an ever-changing market.

Today we’re launching Google Play, an integrated destination for apps, books, movies, and music, accessible to users on Android devices and to anyone on the Web. Users everywhere can now find their favorite apps and games in Google Play, with other digital content, all in one place.

With Android Chief Andy Rubin always quick to report increasing numbers of Android activations (850,000 per day, the last we heard), it is of paramount importance to Google that the Android experience continues to be a seamless, fulfilling one, even after the device has been purchased. 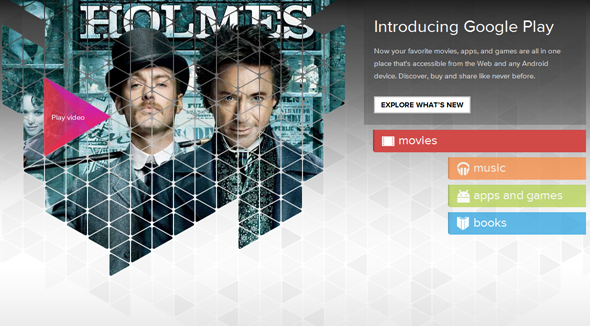 Apple is often lauded for the ease in which rich content is easily obtained through all devices, all of which seem to be in perfect harmony with one another, and that appears to be the sort of thing Google is attempting with Play. The blog continues:

We believe that with a strong brand, compelling offerings, and a seamless purchasing and consumption experience, Google Play will drive more traffic and revenue to the entire ecosystem.

At this point in time, the Apps and games remain the "core" of Google Play, which isn’t surprising since the Music service is still in US-only beta, but Google has certainly outlined its intentions in recent years, having launched the Google eBookstore in December 2010 and YouTube movie rentals last April. All these previously-scattered services will now fall collectively under the Google Play umbrella, and Google has assured users that services should continue to run as normal by logging in to their Google Accounts.

The Android Market app will be upgraded to the Google Play Store app over the next few days, and to celebrate the launch, Google will be offering different album, book, video rental and Android app at a special price each day for the next week in what it calls a "7 Days to Play" sale, (like the Christmas countdown, but without the climax).

Head over to this link to learn more about Google Play.