After many months of speculation, Apple has finally begun releasing invitations to relevant media outfits in preparation for a media event scheduled to take place in San Francisco on March 7th, which is about the next iPad.

We’ve been under the impression for quite a while now that the fruit company has been plotting the third iteration of its revolutionary iPad tablet, but with an official announcement date set, we’ll finally be able to bid farewell to the rumors and speculation and see what Tim’s really been Cooking up. The venue of choice, as expected is San Francisco’s very own Yerba Buena Center for the Arts. 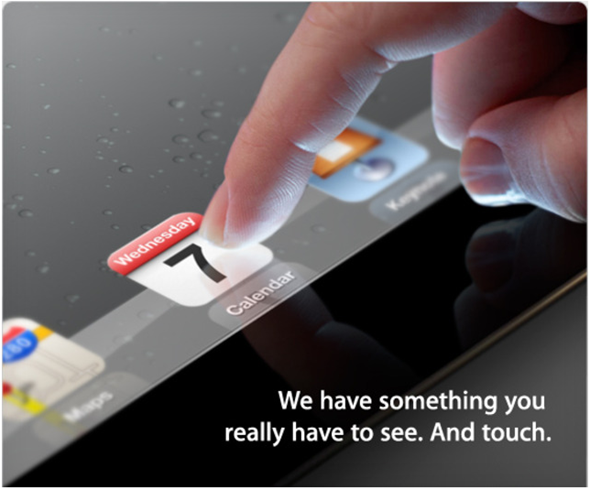 Foxconn and Pegatron have reportedly been assembling the devices over in Mainland China over the last couple of months, and since we’re now within touching distance of launch, let’s round up the features we’ll possibly be seeing with the iPad 3.

We can look forward the iPad debut of a Retina display, something which – after leaning (perhaps regrettably) on Samsung for a couple of years – has been produced by Sharp. Ironically, Sharp is the order of the day, so expect crisp visuals to really compliment the ever-improving roster of apps and games available over at the App Store. Allied to the LCD, a new set of cameras also looks a certainty, since the current coalition doesn’t really correlate with the performance of other iDevices. With 2048-by-1536 pixels to fill, we’d expect the main snapper to pack in either 5 mega-pixels, or indeed 8-megapixels as per the recently-released iPhone 4S.

To round up the hardware upgrades, expect a faster processor – double that of the current dual-core A5 chip currently powering the iPad 2. As for 4G connectivity, the WSJ has reported the iPad 3 will indeed be compliant, with packages available on both Verizon and AT&T. However, considering Apple’s lack of enthusiasm with the relatively new technology hitherto, only the announcement will confirm this beyond doubt.

All this new gear means the iPad 3 will likely be slightly thicker, although apparently unnoticeably so. Certainly, with such an impressive catalog of improvements, even the most cosmetically concerned Apple fan will be none-too bothered by an extra millimeter or two.

Are you excited? We most certainly are, and if the specification matches the speculation, this promises to be one of Apple’s most significant releases in the past couple of years.

And oh, have you noticed that the photograph of the iPad 3’s screen in the invite carries a slightly higher resolution screen?

We’ll be covering the stories from the event as it breaks here at Redmond Pie, so stay tuned!