Google Offering 33 Albums At Only $2.99 Via Google Play Store, Grab Them Now Before The Sale Ends!

The iPod and iTunes combination created a legacy which is now at the heart of all Apple’s current products, and while Google has made some impressive ground on Apple with regards to mobile software, its online music sales still could not hold a candle to that of the Cupertino outfit’s.

In the United States, today is Tax Day, a term which loosely describes the day in which citizens’ individual income tax returns are due to the Government, or "Uncle Sam". This means, for the large part, people don’t have much money, and Google’s doing its bit to help out those hit hard by the income tax while also boosting the profile of its music service.

For one day only, a select few albums can be had for as little as $2.99, and among them are some high-selling, chart hits from the likes of Jay-Z’s Reasonable Doubt to Weezer’s Weezer (Blue Album). Considering the usual pricing range is between 69 cents to $1.29 for a DRM-free audio track, this is one of the best offers you’re likely to come across. 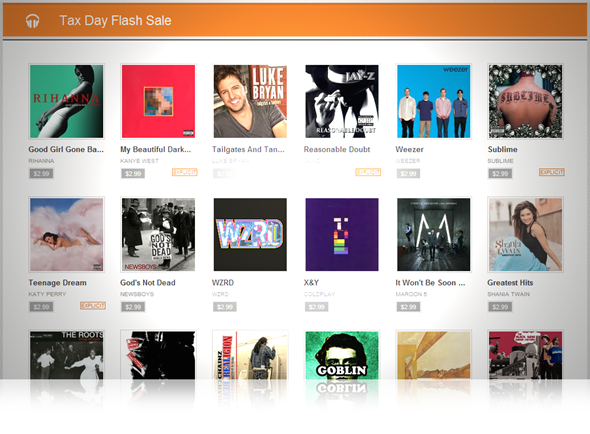 Of course, as you’d expect, it’s only available to consumers residing in the United States, so, unfortunately, if you live anywhere else, you won’t be able to enjoy this great promotional offer.

Although the Play Store – recently renamed by Google from the previous Android Market in order to better reflect its plethora of content – is associated primarily with Android, you do not need to own one in order to download the music. Since, as mentioned, it’s DRM free, it can be downloaded and played on any device – from Androids to iPhones, iPads to Windows Phone devices.

Those meeting the residential requirements can head over to the Google Play Store right now via this link. If you’re a regular downloader of digital music, this is one offer, we suspect, you probably don’t want to miss.