Apple patents don’t always point to new products or features but they are always a great indication of ideas that are being thrown around inside Apple Park. The latest to grab the attention is a patent that includes an Apple Pencil that could detect a color from the real world and then transfer it to an iPad.

Right now users can choose a color from a palette and work with that. But anyone who wants to exactly match a color in the real world has a problem. It’s a problem that this patent would fix, too, according to documentation published alongside it.

Titled “Computer System With Color Sampling Stylus,” the patent describes a future Apple Pencil with a color sensor attached. Photodetectors would measure light at different color channels, allowing the Apple Pencil to discern one color from another. There’s also a suggestion that a light source could also be built into the Apple Pencil to allow more accurate color detection.

The sensors would likely be located at the end of the stylus, opposite to the drawing tip. That would likely give Apple the room required to make this functional, rather than trying to fit it into the tip itself.

The implementation here is pretty obvious. A user could put their Apple Pencil against a piece of cloth and then have its exact color match appear in an on-screen palette ready for use. 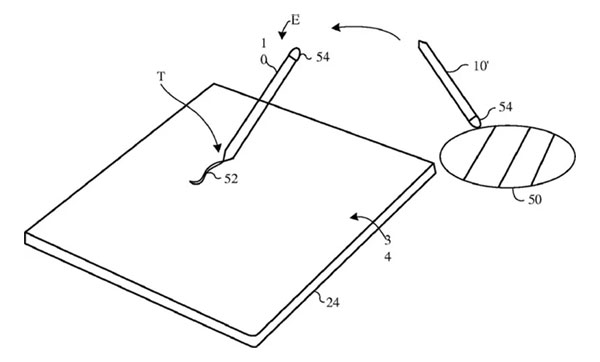 However, it’s important to remember that just because Apple has a patent for something doesn’t necessarily mean that we will see the feature or product released. Fingers crossed this is one of the times where we do get what this patent describes!