So you’d need to have been living behind a rock for the last few weeks to have not noticed the problems that have plagued iOS 8 since its arrival in late-September. There have been a plethora of issues, none more irritating to those that have suffered from it than the infamous problem that has seen Wi-Fi performance severely degraded on a range of hardware. The problem still isn’t fixed as of the recent release of iOS 8.1.1 download, but one jailbreak developer seems to be on to something, and he’s released a jailbreak tweak that should help those with problems.

As if releasing the fix wasn’t enough though, the man behind the tweak – Mario Ciabarra – has also detailed just what is causing the problem over on Medium, and while it does tend to dip into the dark and murky waters of kernels and the like, it makes for a fascinating read even if you aren’t normally of such a technical persuasion. We highly recommend you give it a read, if only because we’re not going to try and bastardise the post here – such things are much better being read from the source as far as we’re concerned.

The gist of it though is this.

Apple’s iOS devices use a technology that is included in order to make peer-to-peer networking possible. Namely, AWDL. It is used for things like AirPlay, AirDrop and GameKit. AWDL in particular is a low-latency technology, and works with Apple’s own dedicated solution called ‘awdl0’.

The problem comes with the decision by Apple to advertise AirDrop over Wi-Fi rather than Bluetooth, like its other technologies, namely; Instant Hostspot, GameKit etc. And due to this reason, iOS 8 and Yosemite users suffer from degraded Wi-Fi performance issues. In order to replicate this, simply run an Internet speed test app and pull up Control Center which will in turn begin to advertise AirDrop, and once that happens, you’ll notice a sudden drop in Wi-Fi performance.

The good news is that Ciabarra has a fix on the Cydia store that disables AWDL, going by the name of ‘WiFried (AWDL Disable)’, but that means you’ll lose out on the functionality that it offers. Thankfully, the tweak also includes a toggle to turn it on and off. Job done, and hats off to Ciabarra for the work.

Like we say, it’s well worth giving the full Medium post a read if only to fill in the blanks that we’ve somewhat intentionally left here. If you’ve been noticing degraded Wi-Fi performance then you’ll certainly want to read, especially if you’re jailbroken and can take advantage of the fix. 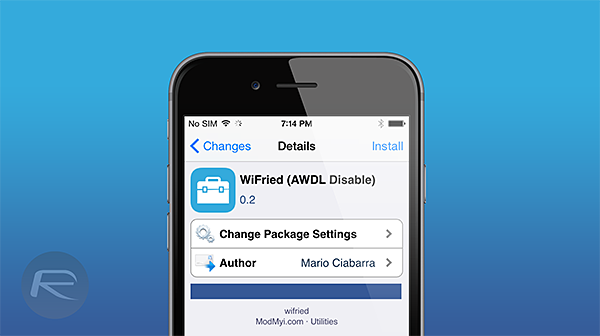 If you’re not, well, you’re left waiting for Apple to sort its mess out. And we all know how quickly that happens.

The ‘WiFried (AWDL Disable)’ tweak can be found under the ModMyi repo in Cydia.