Although the official unveiling of the iPhone 5 remains a week away, we already have a pretty solid idea of what’ll be in store in terms of aesthetics and vital hardware specification. Yerba Buena in San Francisco, California will place Tim Cook and Co. in familiar surroundings come September 12th, and even though we’ve been treated to a glut of images and videos of the next-generation Apple smartphone, it now appears as though we’ve gotten our first look at the device in action. Well, sort of.

The iOS 6-running device has, according to MICGadget, leaked via Foxconn’s Jincheng manufacturing branch, and if it is as legitimate as it appears, is the world’s first look at the iPhone 5 switched on. As the demonstrator boots the device up, it shows an error message and is stuck at the charcoal-colored linen introduction pages prominent in iOS, which is somewhat disappointing for those of us eager to see our first fully-fledged hands-on demo. Check out the video below. 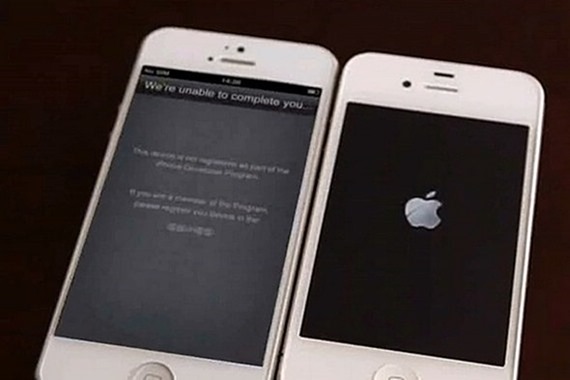 The video originated from Chinese tech outlet Vgooo.com, and was recorded “accidentally” by a tipster visiting a friend at a Foxconn factory based in Juncheng. With up to 3,000 iPhone 5 back panels reportedly being completed every night in the past couple of months, it’s not beyond belief such an exposure of an obscured device could occur, and if it is indeed the long-awaited iPhone 5, I would think a few heads across the world in Cupertino will be seething.

We’re fairly confident it’s the real deal – despite the rather sketchy story, although I always find it rather baffling that whenever there’s a big, world-exclusive, there’s never anybody around with a decent snapper to film it. Maybe the quality of the video has been lowered on purpose to prevent the leak from being traced, but even so, even the snapper of the iPhone 4 would have pumped out a better showreel than the leakers could muster.

The device was not activated, showing the message:

This device is not registered as part of the iPhone Developer Program. If you are a member of the program, please register your device in the @@url@@.

So even if the lights are on, nobody’s (yet home), and this clip will only heighten the anticipation leading up to next Wednesday’s grand unveiling.