Windows Phone 8 was announced by Microsoft some time ago, and the recent special event gave us even further insight into the features on offer with the exciting, metro-laden user-interface. In order to retain interest in and anticipation for Windows Phone 8, the Redmond company held several features back since its original announcement, and at today’s keynote with Nokia, it has been revealed the upgraded ecosystem will indeed include a screenshot feature.

Of course, iOS and Android have housed the ability to capture display stills for a long time, but despite a slick experience and plenty of novel features, Windows Phone 7.x failed to offer such an implementation.

Windows Phone’s Joe Belfiore has posted the first Windows Phone 8 screenshot on Twitter from the recently-announced Nokia Lumia 920, and with the software maker’s new service offering Windows Phone 8 users an automatic, unmanned upload service for images and screenshots, it certainly appears as though Steve Ballmer’s company is making good on its promise to make Windows 8, on the whole, a "Cloud OS."

Not everybody will see the screenshot feature as significant, but as somebody that reviews a fair few mobile apps, it’s nothing short of a godsend. There are a number of reasons why one might wish to capture a screen still – to prove a high-score, capture an important bit of information from the web, or simply to show off a theme to a friend – it’s a handy little tool to have in the inventory. 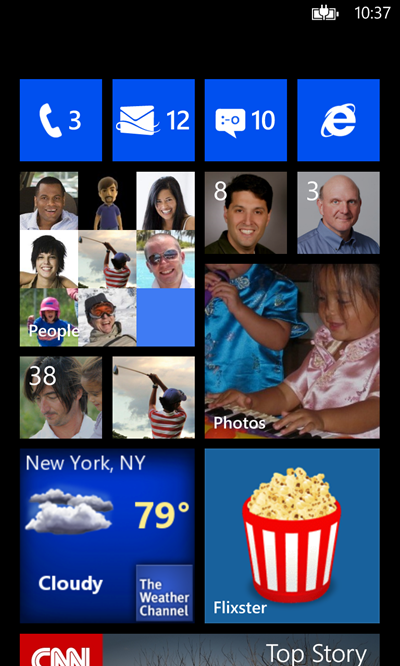 The rumor mill had suggested earlier this year that the ability to screenshot would be coming with Windows Phone 8, and while some suspected it, Microsoft has gone ahead and confirmed it today. As well as rubber-stamping the screenshot rumors, Microsoft also took the time out to show off its vastly updated camera app. The first Windows Phone 8 devices – namely the Nokia Lumia 920 and the Lumia 820 – pack in impressive snappers, and the app to complement the hardware bump as been improved accordingly.

The new app offers pinch-to-zoom features, "Lens applications" which apply instant effects (something we love; Read: Instagram), and a built-in panoramic setting taking advantage of Microsoft’s PhotoSynth technology. The burst mode will allow you to pick the best image of the bunch, and it looks as though the Lumia 920’s PureView snapper – along with this revamped app – will offer an image-taking experience unmatched in the smartphone market.

Windows Phone 8 will, like its desktop and tablet counterpart, arrive by the end of October.