The very first DXOMARK battery test has been made public with Apple’s iPhone 12 Pro Max finding itself in fourth spot behind the Samsung Galaxy M51 in top spot.

The Wiko Power U30 and Oppo Find X3 Neo came in ahead of Apple’s flagship device, with DXOMARK outlining how it comes to its scores.

DXOMARK has developed its Battery testing protocol, and we described in general terms the kinds of tests we perform so as to score smartphone battery performance for autonomy (how long a charge lasts, a.k.a. battery life), charging (how long it takes to recharge), and efficiency (how effectively the device manages its battery during charge up and discharge).

The iPhone 12 Max achieved an overall DXOMARK score of 78, pipped by the Samsung Galaxy M51’s huge score of 88.

With an overall Battery score of 78, the Apple iPhone 12 Pro Max puts in a respectable performance that lands it in the top four in our database so far. While it has an average score for Charging, and an above-average score for Autonomy, it is the current score leader for Efficiency thus far (but as ever, numbers alone don’t quite tell the whole story). 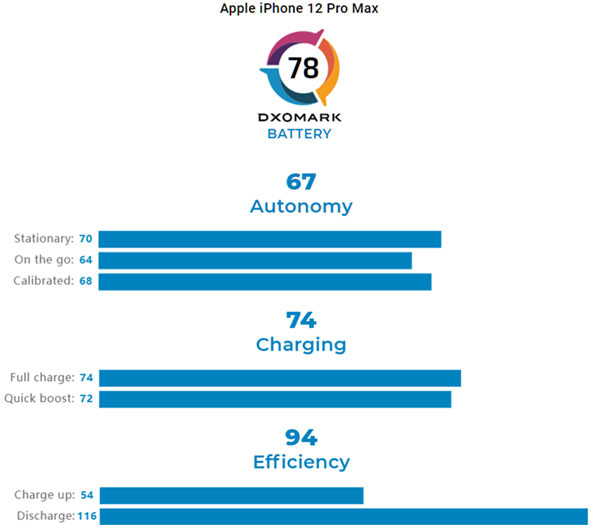 Of course, whether any of this actually means anything is a matter for debate. We’ve yet to hear a single person complain about the battery life from their iPhone 12 Pro Max and it remains the iPhone with the largest battery capacity.