The amount of apps that are available to download for Android and iOS is growing every single day, but it seems that some of the most successful and universally praised apps available are ones that are used to access social networks such as Twitter and Facebook. It has already been proven that developers who manage to create a stunning and functional Twitter client will almost guarantee themselves success, which could be one of the reasons behind the release of the new Falcon Pro Twitter app for the Android platform.

We are so used to seeing Twitter apps associated with a sweet little blue bird, so it makes a change to see an accomplished app bearing the name and insignia of the fast-flying raptor descendant. But does the app live up to its avian namesake? The app is billed as bringing the ultimate Twitter experience to Android smartphones and tablets through an innovative user-interface, seriously fast loading times and buttery animations that glue the whole experience together and provides the final polish. It all sounds good and the early indications suggest that this one will be a hit.

Falcon Pro definitely borrows a few of its innovative user-interface features directly from apps that we have seen on the iOS platform. Apps like Facebook and Path introduced the sliding view setup and the developer has taken the unique step of introducing that concept onto Android. It doesn’t feel as fluid or as smooth as iOS, but, that has a lot to do with the actual polish of the operating system rather than being all down to the app itself. Scrolling through the app in general is smooth and doesn’t detract from the Twitter experience of reading and posting tweets. 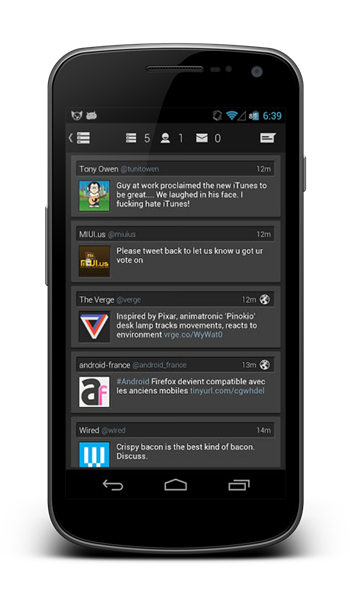 All of the usual features that we would expect from a Twitter app are front and center in Falcon Pro, with the addition of some little extra gems such as real-time expandable notifications, inline preview of posted photographs and videos, as well as being able to view Play Store links on an inline basis. Offline saving, tweet drafts and Instapaper integration are just a few additional nuggets that ship with Falcon Pro. 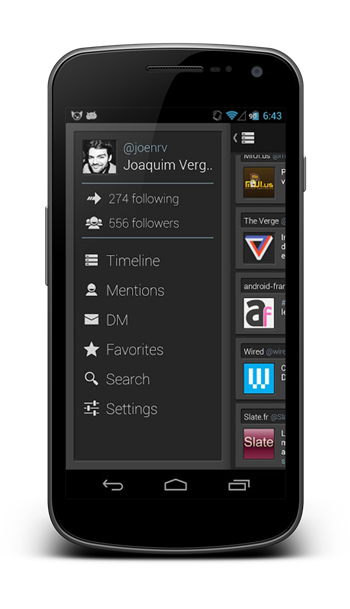 Putting the double sliding views aside, I would find it a hard stretch to describe the interface of the app as innovative or unique, and although it certainly isn’t to my taste that shouldn’t detract from what is a great and accomplished Android Twitter offering. 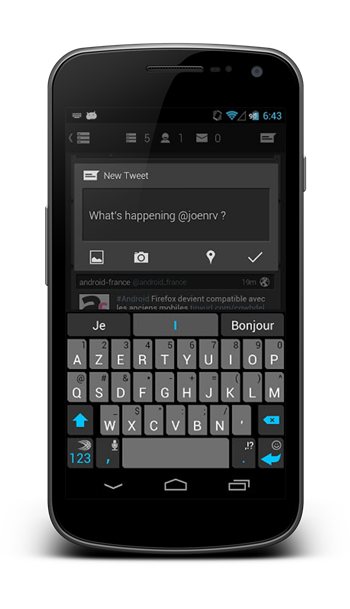 (Source: Falcon Pro for Android on the Play Store)