I had mentioned in an earlier post that one of the things which I was most looking forward to with the release ofthe iPhone 4S jailbreak was the new and innovative uses for the personal assistant, Siri. Developers have been itching to get their hands on a jailbroken 4S to allow them to test, amend and then release their tweaks and enhancements which will bring more power to the already very functional and intelligent voice analysis software.

With the extension of the Corona jailbreak, and the release of the Absinthe tools, we are now in a position where iPad 2 and iPhone 4S users can fully enjoy the world of jailbreaking and developers can comfortably extend their software to include these devices. iOS developer Hamza Sood has previously shown concepts of one of his Siri tweaks which was pretty much complete, bar the final testing stages on an actual jailbroken iPhone 4S. The tweak, known as ‘SiriToggles’ does pretty much what its name says and adds additional toggles and option to the Siri software.

There is no denying that Siri is a brilliant innovation and in my opinion is the reason more than enough to choose an iPhone 4S, but there are some areas that it lacks in functionality. For example, natively Siri will not allow applications to be launched, or individual settings to be accessed and toggled at will. It seems like a huge admission by Apple to have such a powerful piece of software bundled with the 4S’s operating system that lacks the ability to control such pivotal parts of the system.

The aim of SiriToggles is to resolve these issues and fill in the missing gaps, but at the same time, adding a number of useful and important commands to the Siri software which some feel should have been there in the first place. Rumors are spreading out that the next few point releases of iOS will be centered around extending Siri’s functionality, but until confirmed, this is just speculation. Installing SiriToggles allows individual applications to be launched, important settings to be toggled between on or off and even allows an exact level of screen brightness to be set, all through the power of your voice.

The new commands are built into the existing Siri software, so using them follows the exact same pattern we’re acquainted to already. For example, if you wanted to open the Maps application using SiriToggles; you would simply activate Siri and say ‘launch maps app’. Obviously this method transfers through to other applications, just make sure you stick to the ‘launch app’ prefix and then try out whatever application you may want to launch. 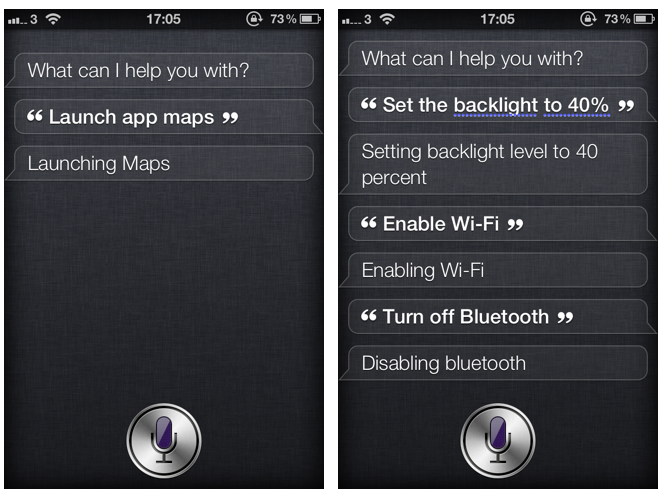 The accepted commands all follow a natural speech process, so for example to set the brightness of your display, the SiriToggles’ command would be ‘set/change the backlight/brightness to X%‘ and to toggle a setting on or off; Siri would accept either ‘enable/disable‘ or ‘on/off‘ followed by the required setting (Wi-Fi, Bluetooth, Airplane Mode, Cellular Data). The SiriToggles tweak is surely going to be considered a much needed addition to the Siri experience, and at only 7kb in size, it is a lightweight and professional implementation by Sood. The developer is also keen to point out that SiriToggles will also work on older generation devices which are running Siri through a tweak such as ‘Spire’.

SiriToggles is available free of charge on the Big Boss repository for devices which are running Siri and iOS 5.0 or higher.