Samsung is the number one smartphone manufacturer in the world right now, and having yielded huge success with the Galaxy S and Galaxy S II, few could have foreseen the impact of the Galaxy Note, which although seeming to look far too large for most pockets, actually sold in impressive numbers.

The Galaxy S III, successor to the Galaxy S and S II, was the most anticipated smartphone of the year, and despite having only been around for a couple of months, has already sold in excess of 20 million units, which is an astonishing achievement for any company – let alone a single device.

With that out of the way, Samsung recently showcased the Galaxy Note II, bringing forth a slightly larger, much brighter display for the famed "phablet," and it seemed to receive a positive reception from fans and tech fans in general.

At a period when a bunch of smartphones are hitting the market in various platforms, every little detail and feature implementation can be a deal breaker to consumers with so much choice. For those who’d perhaps overlooked the Galaxy Note II as a potential purchase, maybe you’d have considered it if you’d seen what the folks of China have in store.

The implementation of a dual-SIM tray is something many consumers have cried out for over the past few years, and whilst hardly any mainstream devices offer such a facility, it looks as though a special version of the Galaxy Note II set to hit the Chinese market will indeed include two separate slots.

It’s worth considering that China will soon become the largest smartphone consumer in the world – surpassing even the United States – so it’s not too surprising to see vendors pay a little more attention to the nation in which a large portion of the world’s electronics are manufactured and assembled. 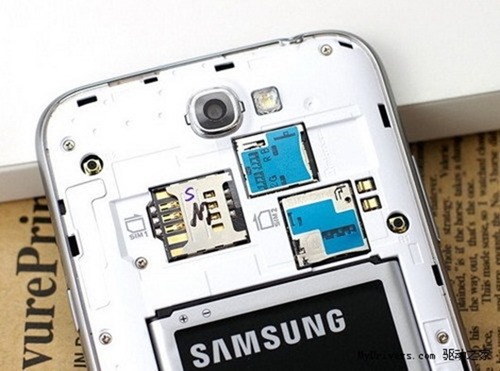 It won’t be a standard feature of the Galaxy Note II, so consumers will almost certainly need to pay extra to facilitate two SIMs, but I’m sure one or two consumers from other nations will feel a little hard done-by. Of the trays, one supports the regular (large) SIM, while the other will hold a micro-SIM.

Aside from supporting WCDMA+GSM radio network, along with dual standby, the device will keep the same specs we’ve become used to.