Microsoft’s motion sensing Kinect has so far been used in plenty of novel ways. We’ve seen, among other things, developers add Minority Report UI-style features to Windows, allow 3D videochatting, and help consumers select dresses by virtually wearing them, but allowing people who have trouble reading to send emails with a few gestures is something very new that we’ve come across today. Check it out after the jump.

The news comes from the folks over at TechCrunch in the form of a short post in which they discuss developer Chad Ruble’s program that helps her mother – who is an aphasia patient of over twelve years after a stroke – to communicate over email with her family. 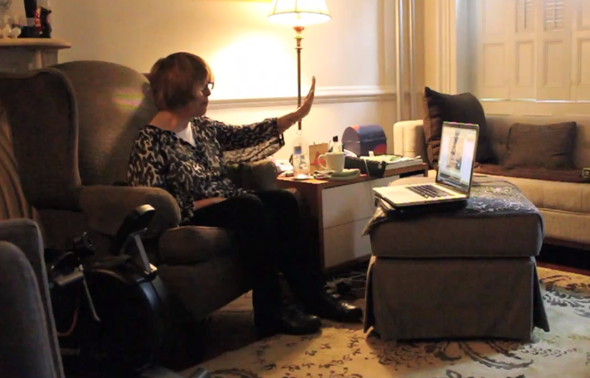 Ruble saw this as an opportunity to bridge the keyboard gap between computers and people like her mother who have trouble with reading and writing, but still wish to communicate over channels like email and instant messaging.

With that in mind, Ruble created a visual dashboard with nine emotions like happy, groovy, sleepy, angry, etc. and four intensifiers that set how strongly they are feeling said emotion. When both are combined, she can send out emails like Lindy feels very happy. You can see it all in the video below:

Lindy’s reaction after sending her first email is enough to cause massive frisson.

Ruble used Kinect along with the OpenNI library plus separate gesture recognition algorithms to track his mother’s hand’s movements. The emails are then sent using some of the email processing code from another developer.

This emailing system is pretty primitive at the moment, as the emails that get sent out are usually a one-sentence affair stating her state of emotion. In the future, the developer plans to include options that would allow her mother to send out emails with more variety and depth. He also notes that the interface needs improving, as in the process of moving her hand to the green send button, Lindy changes her chosen expression. The option to snap, attach and send a photo of her mother along with the email is planned, as well. Although not decided yet, Lindy might even get her own blog from the emails that she sends out.

It isn’t the absolute best way to communicate yet for troubled readers and writers; a lot of improvement can be made.

The developer hasn’t yet posted any links that would allow others to use this software.

*People who suffer from Aphasia have trouble communicating, especially when it comes to reading and writing.