Droid Tops iPhone 3GS for Gadget of the Year Award

Time Magazine today has published its list of “Top 10 of Everything” in which they have picked up Motorola Droid on Verizon network as the winner for their “Gadget of the Year” award. iPhone 3GS which was released in the same year as Motorola Droid could only manage 4th place behind Droid, The Nook and Dyson Air Multiplier. This is what Time’s had to say about Motorola Droid. 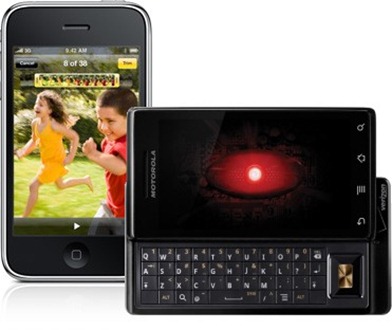 Everybody likes Android, Google’s open-source smartphone operating system. But a smartphone operating system isn’t all that satisfying without an actual kick-ass smartphone wrapped around it. Now Android has one: The Droid is a hefty beast, a metal behemoth without the gloss and finish of the iPhone, but you don’t miss it. The Droid’s touchscreen is phenomenally sharp and vivid, it has an actual physical (not great, but good enough) keyboard, and best of all, the Droid is on Verizon’s best-of-breed 3G network. It’s Android’s first credible challenge to the iPhone. Price: $300.

While Droid maybe the best Android based smartphone out there, but to call it as the best gadget over iPhone 3GS is kind of a shocker. iPhone 3GS in my opinion, both software and hardware design wise is superior to what Droid has to offer. Android OS still isn’t as matured as iPhone OS is in its third revision and with an App Store with over 100K apps, iPhone deserves to be on the top spot.

Having said that, Motorola must be celebrating their unexpected win over iPhone 3GS as Time’s Gadget of the Year. Motorola, before Droid, did not had a major device to carry its sales and attract attention since the launch of its popular RAZR phone in the year 2005.

You may also like to check out the comparison between Motorola Droid and iPhone 3GS posted here.