To pile on to today’s barrage of news and beta software releases – in case you’ve been living under a rock, I’m referring to the release of the Windows 8 Consumer Preview and Windows Server 8 beta – Microsoft has also released the Visual Studio 11 Beta with .NET 4.5 Beta for download.

What’s new in the Visual Studio 11 beta? Plenty. One of the more significant changes that the Internet has been arguing about lately is the decision to suck away all of the color from the UI in order to increase focus on code. While the new monochromatic approach (that’s present in terms of both UI colors and iconography, which has also been simplified) is cleaner, it is quite bland and depressing. Surely they could have added some additional color to the mix without taking away from the focus on the code.

Beyond this user interface aesthetic change, they also introduced a variety of features and user experience improvements to help boost productivity while developing. Here’s a quick rundown of the main improvements:

Hubs – To improve the method of navigating through code, Visual Studio now has new versions of the Solution and Team Explorers. In the Solution Explorer hub, various tool windows – Class View, Object Browser, Call Hierarchy, Navigate To, and Fine References – were integrated into one explorer. Something similar was done with the Team Explorer.

Pivots – Following up on the aforementioned new "Hubs" feature, you are now able to switch the relationship or pivot without switching to another tool window.

Preview Tab – The new preview tab works to minimize the amount of windows created while working on a project; basically, every time a developer does something that would trigger a file to be opened as a "side effect", the file will be opened in the preview tab. You’ll be able to do anything to a file while it is inside of a preview tab, such as edit the content, or convert the tab into a "regular" tab by clicking a button, double-clicking on the file, or dragging the tab. 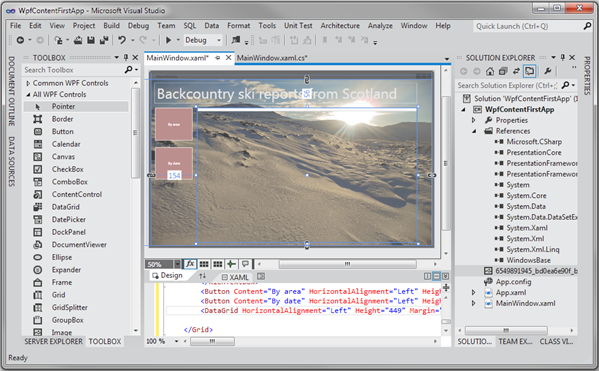 For a complete and detailed rundown, there are two posts on the Visual Studio MSDN blog that delve into the changes and new features, and provide an in-depth overview of how they work.

You may download the new Visual Studio 11 Beta through Microsoft here.