It may have only been released on PC last year, but Sid Meier’s Civilization VI has now made a surprise appearance on Apple’s iPad after the game was released on the App Store.

Following little fanfare, the game popped up in the store earlier today, adding to publisher Take-Two’s growing list of strategy titles that have been made available on the platform. 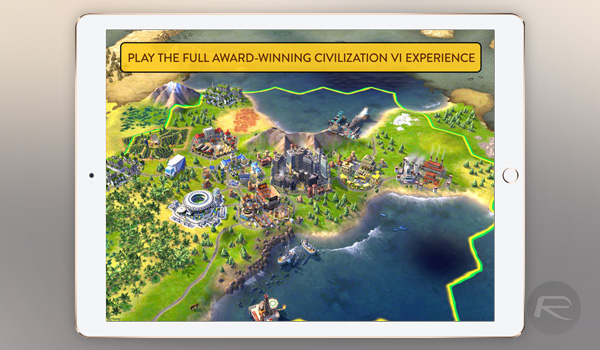 At first blush, the iPad release of Civilization VI appears to be a fully featured version, including the huge empires that have made the franchise so popular among gamers, and it also supports Mods from PC version. Costing $59.99 all-in, the Civilization VI game is an expensive one by App Store markers but it can be had for half of that price until January 4th, so if you are going to buy it you might want to do it sooner rather than later. Not sure about spending the money? No problem – the game is a free download that allows playing through 60 turns before the in-app purchase to progress will be required.

Civilization VI offers new ways to interact with your world, expand your empire across the map, advance your culture, and compete against history’s greatest leaders to build a civilization that will stand the test of time. Play as one of 20 historical leaders including Roosevelt (America) and Victoria (England).

You will need a fairly beefy iPad in order to play the game though – the App Store listing notes that gamers require an iPad Air 2, iPad 2017, or any iPad Pro in order to enjoy it. If Civilization VI does not tickle your fancy, then the original XCOM is also available from the same publisher and is, we dare say, more enjoyable to play.

There, we said it.