In line with the recently updated iPad and iOS 5.1, Apple has also released an update to the iTunes content player/store, which brings a couple of minor new features as well as the usual array of bug fixes.

The new version (10.6) is for download as we speak through Software Update, as well as, of course, on the Cupertino’s official iTunes web page.

The "Revolutionary" new iPad can play full HD content on its Retina display, and the content of the iTunes Store has been updated accordingly. iTunes 10.6 allows 1080p HD movies and TV shows from the iTunes Store to be played natively, which will certainly make good use of those Thunderbolt displays.

Apple TV has also been updated in line with the iPad improvements to support 1080p playback, so it seems as though Apple fans will be enjoying better quality video across the entire range.

There are said to be "many improvements" for iTunes Match, a service which Apple has continually attempted to improve over the last few 10.5.x releases. Having been announced along with iOS 5 and rolled out back in October, the service – which allows iCloud users to listen to 256kbps versions of any song they own in their iTunes library (provided it’s available in the iTunes Store), has looked a shade unpolished against other features released at the same time. 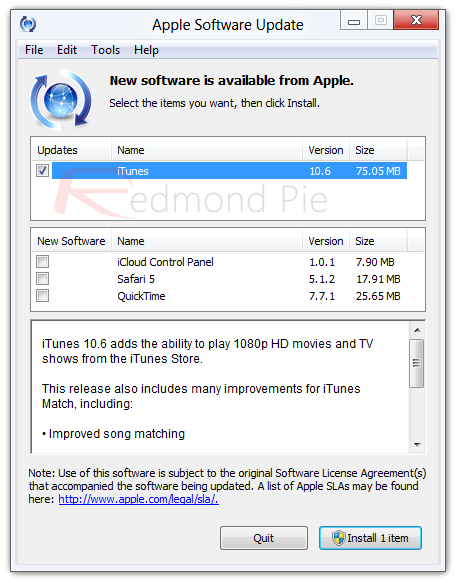 iTunes 10.6 adds the ability to play 1080p HD movies and TV shows from the iTunes Store.

This release also includes many improvements for iTunes Match, including:

• Addresses an issue where songs may skip when playing from iCloud

As stated, the easiest way to update to the latest version of iTunes is to simply do so internally on your desktop, but if you want to go the manual route, simply head over to Apple’s web-based downloads page, select your OS and version, and download.

Download it, give it a whirl, and let us know if you uncover any bugs or hidden treasures. The latter is unlikely; after all, Tim Cook and friends have already treated the tech world today after months of speculation and rumors.

Still, even if you’re not planning on purchasing the new iPad (which, as yet, remains unnamed), it’s certainly worth updating to 10.6 in order to reduce your chances of encountering any issues.