As I’m sure you will now be aware, Apple has finally showcased its upcoming iPad, complete with the Retina display, A5X chipset, and 4G LTE.

No sooner does the tech world get a chance to digest the new features, does the fruit company reveal that its latest and greatest tablet is available to pre-order almost immediately. If you’re an owner of an iPad or iPad 2, the chances are, you’ll want to purchase this next one, which takes things to a whole new level – no matter which tasks you use your current iPad device for.

The display moves e-reading up quite a few gears in terms of clarity, and browsing photos and videos will be a more crisp and colorful experience. Of course, with a new, 5 mega-pixel camera sat on the back of the device, those photos and videos will also be much sharper than the rather hazy performance of the iPad 2.

The new and improved chip certainly ups the performance of the device as a whole, and means apps will respond quicker and run more smoothly than ever before. Additionally, gaming, which is already immensely popular on the Cupertino-based company’s tablet, will improve dramatically -making App Store titles even more serious challengers to the big consoles from Microsoft and Sony.

Tim Cook’s company has finally taken the bold step and dipped its toe in the ocean of 4G LTE technology. Having sat back and allowed rivals to be the early adopters, Apple now believes it has the means to accommodate the chip, which will see connection speeds fly through the roof.

Unless you reside stateside, finding a carrier (and living in a compatible area) may be a little bit of a challenge, but by purchasing the new iPad, you’ll have the technology ready and waiting.

The pricing as you’d expect remains the same, starting from $499, except that the former 3G versions are now world devices which carry support for 4G LTE. 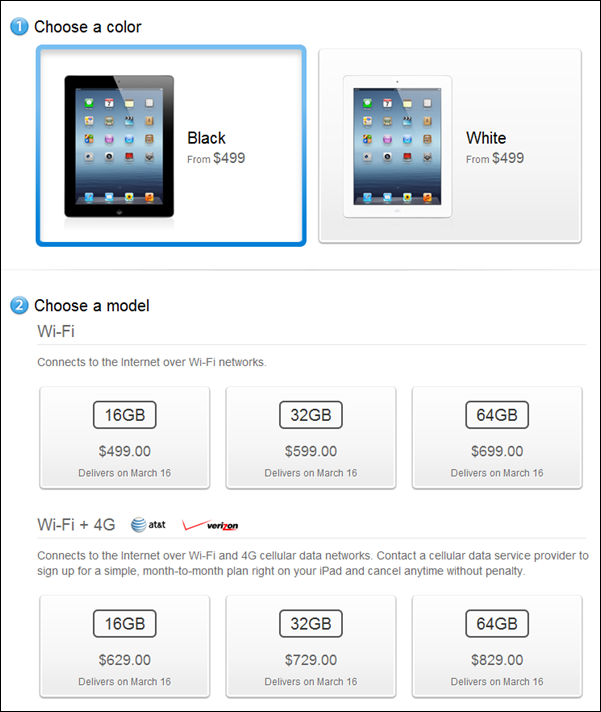 Apple has held back in the past due to concerns about maintaining the slick form factor, but looks to have nailed it this time around. The new iPad is essentially indistinguishable from the iPad 2 visually, but once you turn it on, it’ll be a different ball game altogether.

To pre-order yours, head over to the official Apple Store site via this link.

We’ll be keeping tabs on any more info as it breaks, so stay tuned!