Unlike the apparent panic displayed by Apple in the run-up to the original iOS 5 release, which saw an near-unprecedented number of betas seeded to members of the fruit company’s developer program, there have been comparatively few reports of what is to be expected with its first major revision – iOS 5.1.

Then again, with the 5.0.1 jailbreak talk having quickly transcended into third-generation iPad fanaticism, it’s hardly a surprise. Although there have been a few beta of versions of iOS 5.1 floating about, it was still unclear as to when it would actually be released. That was, of course, until the media event was announced, and today, in front of those present at the rather ceremonious congregation of press, shareholders and suits, Apple has released the final version of iOS 5.1 for the iPhone, iPad and iPod touch.

Although the iPhone 4 Antennagate scandal is often regarded as Apple’s biggest ‘fail’ in the smartphone and tablet market, the iPhone 4S battery issues this time around were enough to mark the otherwise smooth release of iOS 5.x. Said battery problems should now enter folklore.

With a new update to iOS comes the inevitability of yet another cat and mouse chase with the jailbreak scene. The first iOS 5 jailbreak took just over two months to be completed, allowing those running A4 devices to enjoy an early New Year’s present in December. Midway through January, though, the so-called jailbreak "Dream Team" – headed by the Chronic Dev-Team – produced the perfect tonic (specifically, Absinthe) to those waiting on tenterhooks with their A5 devices.

Let’s hope the developers still pose the nous and determination to crack Apple’s latest security barrier in iOS 5.1; they’ve certainly got our backing!

Here are the official download links to iOS 5.1 directly from Apple:

This new iOS update is also offered as over-the-air (OTA) for those of you who already running iOS 5.x.x. Accessing the update feature is as easy as heading into Settings > General > Software Update and following the on-screen instructions, as shown in the screenshot below. 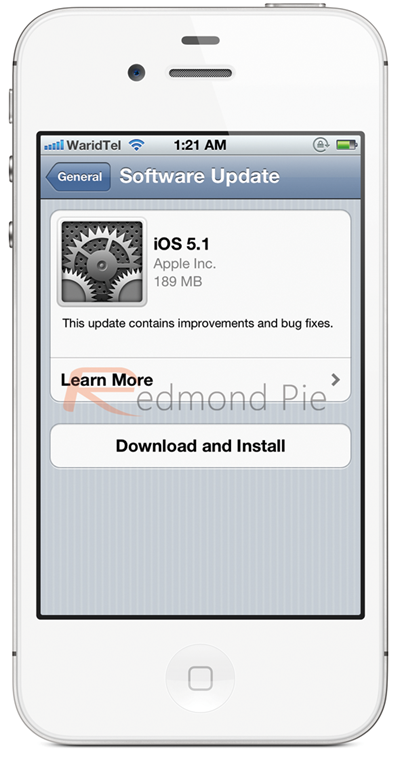