Only days after seeding the first Beta of iOS 5.0.1 to developers, Apple today has dropped iOS 5.0.1 Beta 2 to the registered developers of iOS Dev Center.

The news comes straight from Apple in the form of an update posted on iOS Dev Center about iOS 5.0.1 beta 2.

The second beta of iOS 5.0.1 comes just two days after its first beta was seeded to developers. While we are not aware yet of what’s included in beta 2, it is safe to say that it does whatever iOS 5.0.1 Beta 1 did – such as fix battery life bugs, add multitasking gestures for original iPad, tightens security (to fix that iPad 2 Smart Cover security issue) and fix general bugs – in a more refined manner. So basically, feature-wise it is the same as beta 1, but it is definitely going to be more stable.

In order to get iOS 5.0.1 beta 2, you will need a developer account from Apple. If you have one, you can just visit iOS Dev Center and download the IPSW from there (link given below). There are, of course, other ways to get the IPSW, but those methods are illegal and do not guarantee safe operation of your device. It is, then, in your best interest to stay away from torrent and warez sites. You can also get it in the form of an OTA update straight on your iOS device. 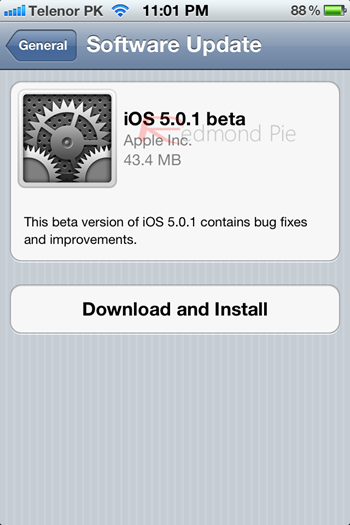 While we do not have confirmation yet, iOS 5.0.1 Beta 2 will probably be jailbreak-able using redsn0w or sn0wbreeze, an updated version of which will be released soon and we will, of course, have the guide for it as soon as we have more information. If you’re on iOS 5.0.1 beta 1, you can follow our guide on how to jailbreak (semi-tethered) iOS 5.0.1 beta 1 (Sn0wbreeze) or with Redsn0w.

No release date has been given for iOS 5.0.1 yet, but it is expected to release before December.

You can download iOS 5.0.1 Beta 2 from the link embedded below. We are receiving reports that folks are having difficulty in downloading the update, so please be patient.