While iOS 5.0.1 can already be jailbroken using Redsn0w for Windows and Mac, hacker and developer iH8sn0w has also updated his famous jailbreak tool for Windows called Sn0wbreeze to support iOS 5.0.1 beta jailbreak. 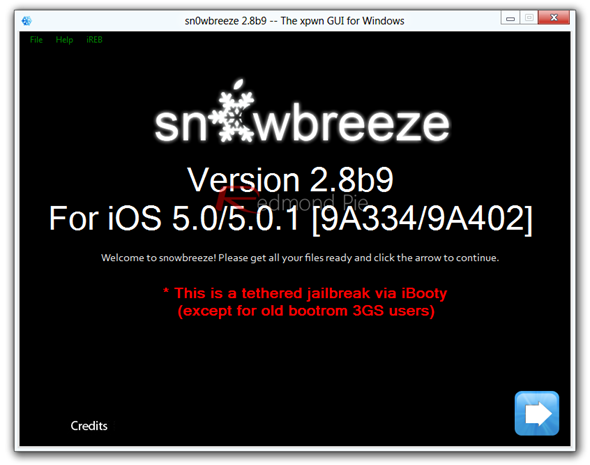 The jailbreak, as you might expect, is limited to tethered boot, which means, if ever, you come across the event of your iOS device losing power completely, or if it requires a restart (for some reason), you will have to connect it to your Windows touting PC to boot it back into the jailbroken state, every time. Sn0wbreeze, just like Redsn0w, allows users to cook custom firmware files for iPhone or iPod touch with old preserved baseband which can then be later on restored via iTunes. This is useful for iPhone users who rely on a Gevey SIM unlock.

Keep in mind that the current version of iOS 5.0.1 is meant for developers only at the moment, with a public release to follow soon in the coming weeks. This release of iOS 5.0.1; enables multitasking gestures for the original iPad, improves battery life significantly over the final version of iOS 5 and contains other numerous bug fixes.

The complete change-log for the new and updated Sn0wbreeze 2.8 beta 9 for jailbreaking iOS 5.0.1 is as follows:

From the change-log, you can tell that iH8sn0w has implemented some key features over Redsn0w, such as the dreaded iBooks crash fix and also re-implemented some older features which includes flashing the 3G iPad’s baseband on the iPhone 3GS that can be used to later unlock said device on the final version of iOS 5 using the updated version of Ultrasn0w.

You can follow our guide posted here on how to jailbreak iOS 5.0.1 using Sn0wbreeze 2.8 beta 9, the steps are exactly the same but keep in mind that you have to use the iOS 5.0.1 firmware file tailored for your iOS device where necessary and the latest version of Sn0wbreeze itself of course (download link at the end). Redsn0w users can follow the instructions posted here on how to jailbreak iOS 5.0.1 on Windows or Mac, but also keep in mind that currently Redsn0w also supports a tethered boot jailbreak only. Its all about preference at this point on which tool you want to use to jailbreak your iPhone or iPod touch.