Popular messaging app WhatsApp appears to be getting ready to gain a dark mode to call its very own. That’s after a number of users spotted that the app’s latest TestFlight build included mention of the feature.

TestFlight is a mechanism for companies to share beta releases of their apps ahead of making them available on the App Store.

And those who are part of the WhatsApp TestFlight program have noticed that the most recent release – version 2.20.30 – includes dark mode in its release notes.

This follows Android users getting a similar feature in their own version of WhatsApp recently, and that’s usually a good indicator of what is coming to the iPhone version of the app at some point in the future. Now, it looks like we can expect it sooner rather than later.

At the time of writing the main App Store version of WhatsApp is still without dark mode, but depending on how quickly WhatsApp decides to release version 2.20.30, it might be around soon. 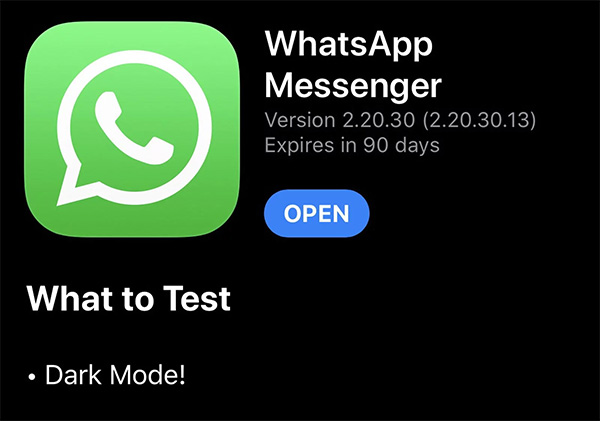 Not all apps support dark mode on iPhones and we’re more than four months into iOS 13’s rein. The arrival of dark mode for WhatsApp is one that has been long talked about and it will be good to finally check it off the list. Then we’re left starring blankly at Gmail with Google not known for being quick off the mark when it comes to adding new iOS features.