With our cherished mobile gadgets now packing in very decent cameras, many have opted to ditch the unnecessary pocket-fill of the traditional standalone camera.

The impact of the smartphone camera – particularly that of Apple’s iPhone – has been colossal, with the 5 and 8 megapixel snappers of the iPhone 4 and 4S respectively rising to become the most-commonly used on Flickr – one of the world’s largest social hunts for photographers.

Maybe we’re just being a little picky here, but the native camera is bereft of many features which would make it a tidbit more complete. Apple dipped its toes into the panoramic ocean in some of the many iOS 5 betas, but decided to plug the idea with the end-user release in October, meaning the Camera app for the fruit company’s latest mobile operating system remained the same as in the preceding iteration, except for adding a few features.

Sure, there are many third-party photo-centric apps which make shot-taking even more enjoyable, but a more refined stock app is always more favorable in our book. GrayPix, a tweak developed by Elias Limneos, does exactly that – improving the pre-loaded offering by adding one simple feature – grayscale. 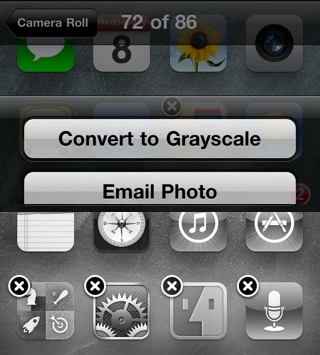 Okay, so it’s not exactly a world-beater, and doesn’t do much more than simply de-colorize your images. Nonetheless, sapping the color from a photo can often enhance its effect, and certainly helps out those not-so-photogenic folk amongst us.

It’s free, and can be obtained over at the BigBoss repository, which will be in your default list of sources in Cydia.