The release of iOS 5 in October 2011 was one of the biggest iOS revisions and brought over two hundred new user features. A lot of these features have been well reported on and have been classified as substantial additions such as the new Notification Centre and the new iMessaging system.

One of the smaller feature inclusions, which doesn’t gain a great deal of attention is the ability to quickly access the camera from the lock screen of the device by double tapping the home button when it is locked. Performing this action creates a ‘camera’ button to the right hand side of the lock slider, which when tapped loads up the default camera application.

This little feature certainly goes some way to appease the photography loving iPhone owners who have previously complained that they are missing photograph opportunities due to the length of time it takes to unlock the device and then launch the camera application. Although the new iOS 5 quick launch button is definitely quicker than previous methods, it still takes a measurable amount of time for the camera to open as it is still technically unlocking the device, then launching the camera.

On previous versions of iOS, one solution to the problem was known as ‘Snappy’ and found its home on the Cydia store. It is a pretty familiar story that when developers are faced with parts of iOS that they think could be changed, they generally go ahead and produce a tweak which changes it. The Snappy tweak has now been updated to work with iOS 5 and stays true to its original functionality by offering almost immediate access to the devices camera. 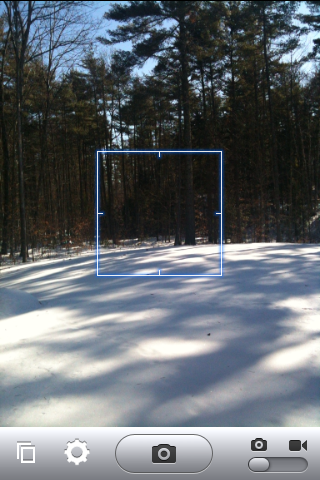 As with with a lot of tweaks which require ‘launching’, Snappy5 hooks into Activator to allow users to define gestures to launch the camera. Because Snappy5 ties into mobile substrate it provides pretty much immediate access to the camera. The launch gesture can be configured through Activators settings, whereas Snappy5 itself also has a settings entry after installation. The settings provide some additional functionality, and are as follows: 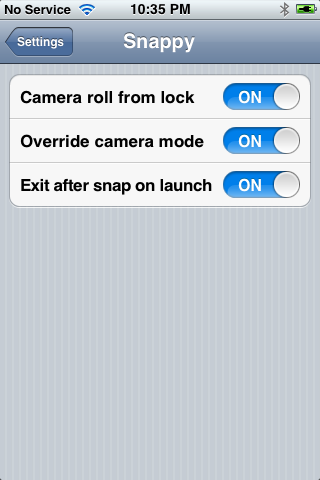 You can also specify different Activator actions to launch the camera in standard mode, or directly into video shooting mode.