You know you’ve truly made it when you’re the butt of the joke on something like Conan O’Brien’s late night TV show, and Apple has found itself in that particular position on more than a few occasions. We’re not sure the folks in Cupertino will be laughing quite so hard though.

The latest outing for O’Brien and his repertoire of Apple gags has fellow comedian Matt Walsh taking to the camera to offer a step-by-step guide on how to make your very own iPad. Not out of some of Foxconn’s finest slave-labor produce, but instead out of a collection of household parts that you’ll no doubt find dotted around the average family home. While real iPads feature high-resolution screens, flex cable and some sort of lamination voodoo, Walsh’s version uses decidedly different parts. 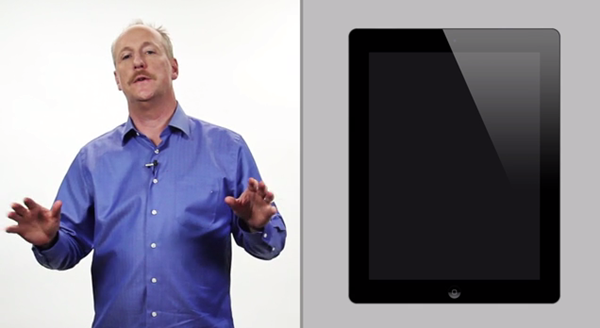 So, if you’re going to want to try and follow along at home, then you’ll need some vital bits and bobs including an etch-a-sketch, lashings of peanut butter, speaker wire and some duct tape to make it all hold together. When you’ve married that little lot in unholy matrimony, then you’ll have something that looks and indeed functions just like Apple’s latest and greatest iPad Air.

Still, if you’re of a particular persuasion and can leave the brain cells in the other room, be sure to check out O’Brien’s latest swipe at Apple, preferably with that peanut butter to hand. After all, you’ve gotta eat, right?

Apple has recently been on the back foot with regards to iPad sales, with many questioning sales numbers and the tablet’s longevity beyond its current version. They say there’s no such thing as bad publicity though, so maybe Apple will be laughing at this after all.

It will be interesting to see how Apple tackles the situation, though. Maybe with the release of new iPad models with ‘better everything’. Only time will tell how such a thing will pan out, until then we have this DIY video to share with you guys.

Give it a good watch and laugh!