The San Jose leg of the ongoing, worldwide battle between Apple and Samsung is really heating up, with pivotal members of both companies now taking the stand and offering their take on proceedings. For those of you who’ve been living in a cave for the past few months, Apple is claiming up to $2.5 billion in damages from Samsung regarding a wide range of alleged patent infringements, mostly circulated around the design of the Korean outfit’s Galaxy design and form factor.

The Cupertino company has accused its bitter rival of “slavishly” copying both the iPhone and iPad in order to create the famed Galaxy Tab and Galaxy S smartphone range, and as has been highlighted several times over the past couple of months, the change in direction Samsung appeared to take after the release of the iPhone and iPad is stark. 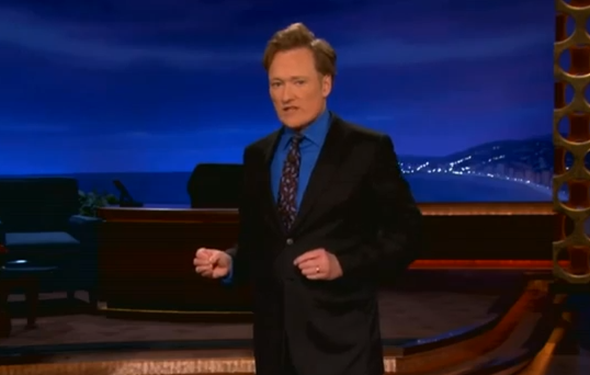 Conan O’Brian, who is, for the unfamiliar, an American talk show host, has run a very entertaining sketch which, in no uncertain terms, paints Samsung as plagiarists of Apple products. It begins by poking fun at the similarities between the products, before the character playing “Samsung’s VP of Electronics” morphs into a similar get-up of a polo and spectacles worn by the late, great Steve Jobs.

Things go even further, and since Samsung is also known for making various household electronics products like washing machines and microwaves, said appliances are then manipulated to look as though Samsung copied those, too. My personal favorite is the Vac Pro, which takes the Mac Pro and adds a nozzle to make it appear as a vacuum cleaner.

The sketch then shows off Samsung Retail Stores and employees – all of which have been superimposed into shots of Apple Stores, while a fake Steve Jobs and Samsung‘s own Jony Ive also makes an appearance at the end.

It’s certainly entertaining for us to watch, although I suspect Samsung won’t be seeing the funny side here. The company, which has had some success in similar cases around the globe, has a major task on its hands to prove it did not copy Apple in any way. Leaked internal documents appear to show how Samsung came up with ideas for its products by comparing features of its own devices with those of Apple, and the general consensus of those watching the case seems unanimous in its condemnation if Samsung.