New iPad TV Ad ‘All On iPad’ Is All About AirPlay, Twitter And More [VIDEO]

If you take away the fantastic customer service which I have always received, the wonderful quality and usability of their products, and the sense of fairy tale that has surrounded the company over the last few years, the one thing that I have always loved about Apple is their ability to produce wonderfully simplistic commercials that show off their products in the best light. Apple has a pretty decent history when it comes to advertising campaigns, with their ‘Crazy Ones’ commercial holding an iconic status around the world.

Over the last few years, the emergence of the iPhone, iPad and the rising popularity of the Mac range has driven Apple down the route of producing commercials that really are as simple as they can be, but show their products in the best light while being used for everyday situations. As part of that ongoing strategy, the company has produced and starting airing a new advertisement that is entirely centered around the current-generation iPad device. 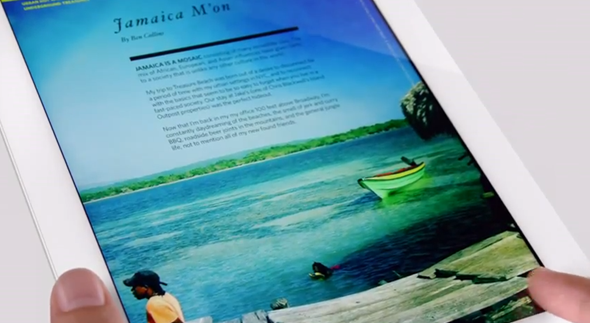 Although the third-generation iPad is aesthetically similar to its predecessor that was launched in March of 2011, possibly the main difference is the upgraded Retina display which Apple has packed into this one. The new commercial is obviously intended to make the public aware of this and heavily features apps being invoked and running on the gorgeous Retina display. If you have seen one of the company’s recent adverts then you’ll be aware that they usually feature a number of apps that are available from the App Store, something that is usually a gold mine for the developer of the software. In this instance, the shown apps are Apple’s own work-based apps, as well as a few others that really need no additional promotion.

Apart from the feature software, Apple seems keen to draw the users’ attention to some of the excellent hardware and software features that have been crammed into the current iPad. AirPlay mirroring and FaceTime video calling get a good outlining, as well as showing off the amazing games which users can download and play on the device. A technologically advanced device that can handle credit card payments, wirelessly play movies to a high-definition television set, while sending out information to social network timelines, sounds like an awesome piece of kit to me. Check out the new advert for yourself and see what you think.