With Apple having now announced the iPad 3 showcasing on March 7th, many pundits are giddily speculating on the tech specs and availability of the fruit company’s third tablet offering. 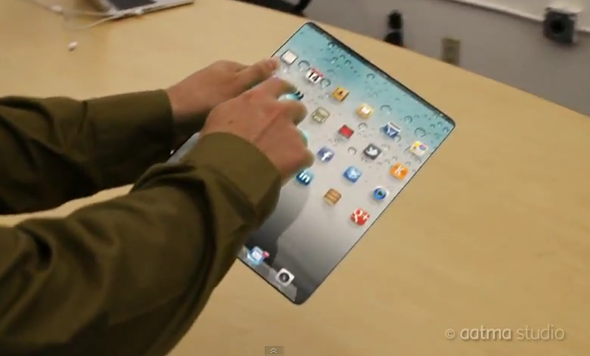 Although we have a general idea of what to expect in terms of features, it’s always nice to kick back and check out some mind-blowing – if a little far-fetched – concepts dreamed up by the talented and creative developers. Amid the furor surrounding the iPad 3, Aatma Studio has done exactly that, and I think you guys will agree, it’s one of the best concepts ever seen:

The edge-to-edge screen is an idea that has been toyed with by concept-makers for a long time now, although usually, it’s a faux iPhone seen donning the sleeker, polished display. In the video, two "iPad 3’s" are pushed together, allowing a simulated 3D football match to take place – complete with laser-beamed controls at either side of each device.

It does somewhat remind me of this concept – another mind-blowing glimpse into what could be the future in technology. Although laser infra-red keyboards and controls in our iPads and iPhones seem a long way off at this point in time, it’s certainly not beyond the realms of possibility.

Although we’re not going to be seeing any of these demonstrated when the announcement is made on March 7th, that doesn’t mean to say the iPad 3  – or whatever it shall eventually be entitled – isn’t to be looked forward to. The all-but confirmed Retina display, improved camera, and faster processor could also be joined by LTE technology – which would be an unprecedented move from the Cupertino-based company and certainly speed up the data speeds of those in compatible areas.

Well, with the announcement due in just over a week, we’d presume the release will follow a fortnight thereafter.

We’ll certainly be keeping an eye out for any scrap of iPad 3 news in this critical week pre-launch, so stay tuned here at Redmond Pie!

Thanks Prashanth  for the hat tip!