Censorship is a major issue in today’s society. Whether it’s the government, music, advertising or film industry, many things we see, read and hear are changed up, modified and amended in one way or another. 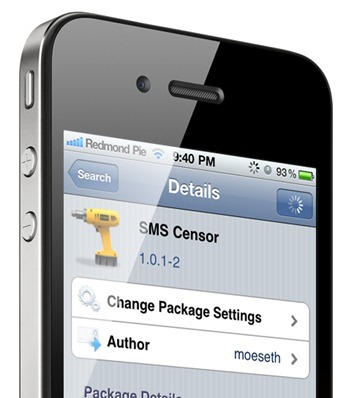 A new jailbreak tweak, which goes by the name of SMS Censor, allows you to exercise a little censorship of your own. You can add an unlimited amount of words to a blacklist which prevent a message containing these words from being sent. While it seems rather pointless for the average user, it could prove useful for those who have kids using iPhones and wish to prevent the use of profanities.

I have to say, when I first saw the title of the app, I was somewhat hoping to see features which censor incoming and outgoing words, so for example, you could add some swear words to be replaced with *bleep*, and if you’re feeling really pedantic and hate it “wen ppl typ lyk dis” – despite most phones coming with a full QWERTY keyboard – you could create a nice filter turning all that *bleep* into nice, proper, coherent English!

SMS Censor gives you two tweaks for the price of one, and the second one is arguably of more value than the first one. It brings customizable message confirmation. Much like AskToSend, which presents you with a pop-up asking whether you wish to go ahead with sending the message, this part of the tweak lets you customize that message to read anything you like, which can be great fun: 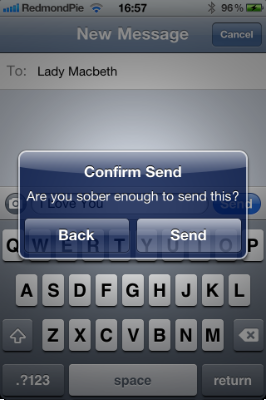 Jokes aside (to a degree), this actually could be a saving grace to those partial to a drunken, potentially life-ruining text message or two! To me, the secondary tweak warrants the purchase – more so than the rather disappointing SMS Censor.

You can pick up SMS censor over at the BigBoss repository for $0.99 from the Cydia Store.

In order to dabble in a little censorship of your own, you need a jailbroken iPhone. You can follow our step by step guide posted here to jailbreak your iPhone, iPad or iPod touch on iOS 4.3.5 using Redsn0w (or PwnageTool), or on iOS 4.3.3 using Redsn0w, PwnageTool, Sn0wbreeze & JailbreakMe (that last one being the easiest).