Tihmstar first showed off his jailbreak by sharing a YouTube video in which an iPhone 4s running untethered-jailbroken version of iOS 9.3.4 can be seen running Cydia before releasing it for everyone else to use.

The name Tihmstar is one that continues to grow within the jailbreak community with the recently-released Phoenix jailbreak and previously-released Prometheus set of downgrading tools proving very popular. As mentioned earlier, BetterHomeDepot untethered jailbreak allows owners of older 32-bit devices to jailbreak if they are running iOS 9.1-9.3.4, which was something not previously possible. However, this jailbreak’s utility can be questioned given the very narrow band of users who will be able to benefit from it as it’s only available for 32-bit iOS 9.1-9.3.4 devices.

So unless you are already on that firmware, or have SHSH2 blobs saved for downgrading, you won’t be able to make use of it. Not to forget that out-of-the-box Tihmstar has only added support for iPhone 4s. You can though add support for just about any other 32-bit device by adding its offset in /untether/offsets.json. 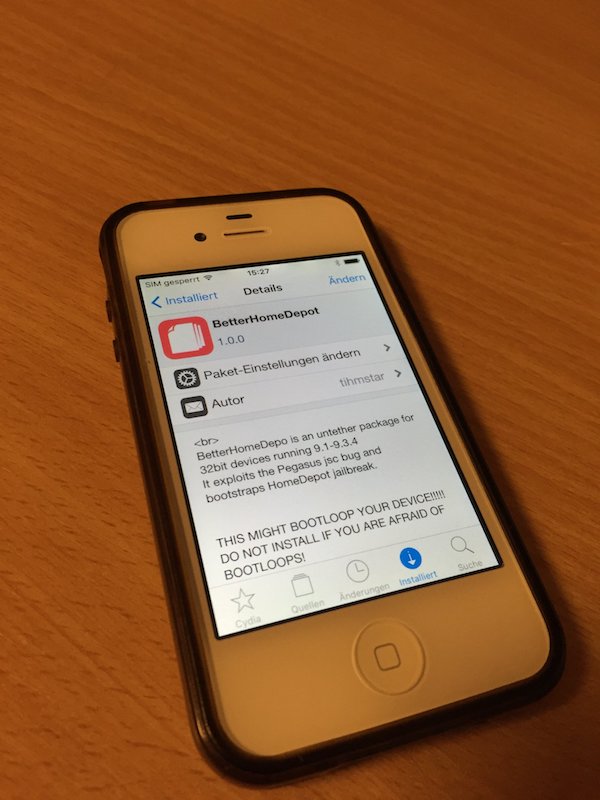 If you run into bootloop issues, Tihmstar has following suggestion to fix it:

If you got a bootloop with betterhomedepot untether, be sure to reboot at least 10 times for the bootloop protection to trigger

Here’s the video of the untethered jailbreak in action:

Tihmstar is one to watch in the jailbreak scene right now, and this newly released jailbreak just goes to further drive that point home. People like him give us hope for more useful jailbreaks on future versions of iOS moving forward.