You can now download BetterHomeDepot 1.0.1 untethered iOS jailbreak update. Here’s what is new in this update.

We recently brought you the news that developer Tihmstar had released the BetterHomeDepot package onto Cydia which bootstraps the HomeDepot jailbreak for 32-bit devices running iOS 9.1-9.3.4.

The initial release of BetterHomeDepot meant that iPhone 4s owners who were jailbroken using Home Depot or Phoenix on 9.1-9.3.4 were then able to install this package and turn it into an untethered solution, which is the first untether we have seen in the community for a long, long time. Following on from that release, the package has now been updated to bring additional device support out-of-the-box. The latest update to the installable tweak is now available through the Cydia platform and should be showing up as an update for anyone who currently has it installed and wants to refresh those packages. Anyone looking to install it as a new download will be served with the latest version which introduces support for iPad3,3 running iOS 9.3.2.

The update means that Tihmstar now states official tweak compatibility with iPhone4,1 running iOS 9.3.4 and iPad3,3 running iOS 9.3.2. As our previous coverage stated, it is possible to add support for additional 32-bit devices running iOS 9.3.1 to iOS 9.3.4, but device owners will need to add individual device offsets themselves to do that.

As mentioned earlier, BetterHomeDepot is the first untether that package that we have actually seen drop into the jailbreak world for quite some time. It’s great to see device owners finally being able to get excited about something, but there’s still a question around how useful BetterHomeDepot actually is out-of-the-box. The package comes with official support for only two devices thanks to this update, and although users do have the ability to extend that support via the input of offsets, that’s not to say that everyone will actually have the capabilities or understanding to do that. 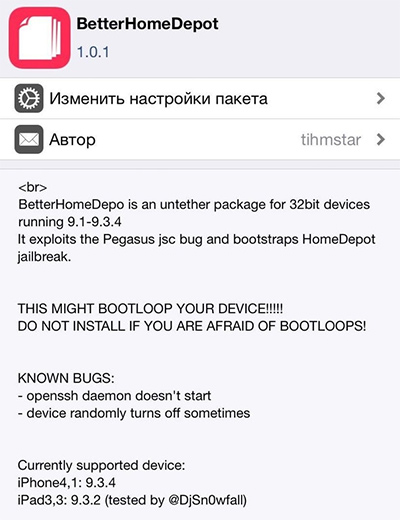 There’s also the rather scary warning which comes with the package, stipulating in the tweak information that “this might bootloop your device!!!!! Do not install if you are afraid of bootlops!” It’s probably fair to suggest that no-one actually wants to experience a bootloop on their treasured device, especially if they don’t have the technical proficiency or know-how to actually resolve that issue.

With all of that information in mind, make sure that you read carefully and install with caution.