The existence of Apple’s iPhone 6s and iPhone 6s Plus smartphones represent the combined efforts of multiple Apple teams over the course of multiple years. It’s naive to assume that this particular piece of hardware has only been in the works for the last twelve months or so, when in reality, it embodies everything that has came before it and learns from the mistakes made with previous releases. It’s truly a work of technology-based art. So, just what do you do with a work of art? You freeze it in liquid nitrogen and smash it with a sledge-hammer, apparently.

With the annual launch of every iPhone we see the similar types of videos hitting the Internet. We’ve witnessed new iPhones being dropped from various heights and positions onto various different types of surface to see what damage occurs. We’ve seen iPhones being submerged in water to see how quickly they fall victim to the effects of drowning. We’ve even seen super slow-motion videos of iPhones being shot by high-powered rifles. So, it shouldn’t really surprise us that we’re now seeing a beautiful iPhone 6s submerged in liquid nitrogen and obliterated with a sledge-hammer. 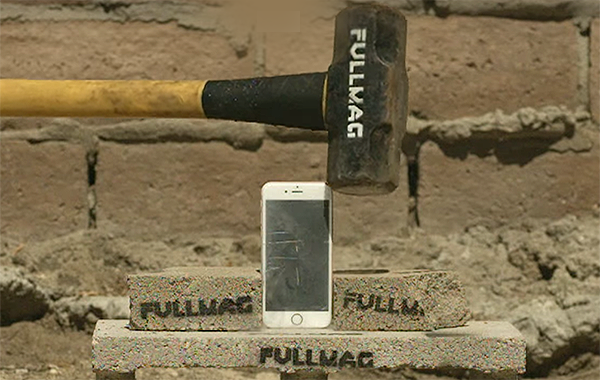 The video, uploaded to the FullMag YouTube channel, shows two safety-conscious gentlemen loading the liquid nitrogen into a container before cutting to a shot of Apple’s iPhone 6s in the beautiful new Rose Gold finish. Before the iPhone gets the liquid nitrogen treatment, the individuals responsible for the video decided that the liquid nitrogen’s effectiveness should be tested out on an Apple Watch Sport. You quickly see the green Sport Band before a sledge-hammer smashes through the body of the Watch as it sits on a concrete block.

Next is the turn of the Rose Gold iPhone 6s. The phone is submerged in the liquid nitrogen for a period of time before being wedged standing up between two concrete blocks. It then meets its immediate doom as the sledge-hammer is driven into the top of the device forcing it to smash into an uncountable amount of individual pieces. We can understand some drop tests and waterproof tests where such tests attempt to simulate a real-life occurrence, and can have varying outcomes. Liquid nitrogen and a sledge-hammer on the other hand, can really only have one outcome.

If you like to see expensive pieces of technology being destroyed in slow-motion, then this is probably the video for you. Check it out below.