Watch: How Many iPhones Can Stop An AK-74 Bullet? [Video]

Every once in a while you hear about someone who was lucky, or unlucky enough to have a bullet hit their random piece of technology. Often this saves their lives, with them then free to tell the tale of how someone tried to shoot them only for their Palm Pre to take the bullet for them, or any other gadget for that matter. Wonderful stories, all of them, if you take the time out to read the lot.

Some people like to just shoot things though, and when they combine that with a love of technology they seemingly do the one thing that jumps into their head – they shoot technology. 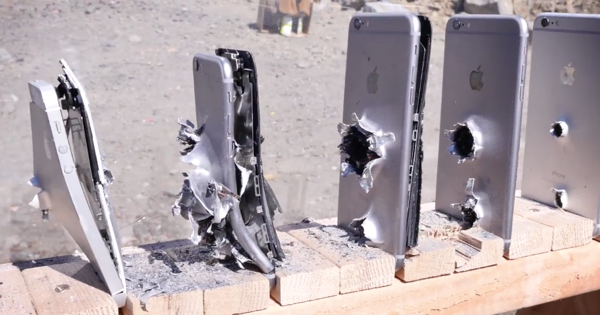 The outcome of all of this is usually a YouTube video of said people taking bullets to smartphones, tablets and just about anything in the name of science and of course, pure entertainment for people like us. The latest of these videos to crop up on our radar is by EverythingApplePro. The video, a rather lengthy one at over four minutes, shows our gun-toting videographers line up a sacrificial collection of iPhone 6, iPhone 6 Plus and other iPhone models with the sole aim of shooting them. Shooting them with an AK-74. Oh the humanity.

Of course, like good little YouTubers, they made sure to set up a couple of cameras before the shooting commenced, with the outcome now on YouTube for all of us to gawp at. And gawp we are, with the video having garnered over 3.2 million views – at the time of writing – in the little over a week that it has been up on YouTube’s site. Apparently, people like to see iPhones get shot.

Here’s the video itself in action, but if you don’t want to watch it right away, then spoilers and the aftermath of the outcome are posted below.

For those who don’t want to waste their time watching a 4-minute video of some iPhones getting shot, the bullet managed to pierce its way through 5 iPhones and land on the sixth, with the last two towards the end of the line surviving relatively unscathed. Relatively. That’s a lot of firepower if you’re asking us.

We’re not really sure why people feel the need to shoot smartphones or indeed anything else for that matter, but there you go.