It’s always a great occasion when Apple’s iPhone launch day comes around. In fact, there’s generally elevated excitement in the air whenever Apple launches any new hardware. To coincide with today’s official release of the iPhone 6s and iPhone 6s Plus the traditional “let’s see how much abuse the hardware can handle before it breaks” videos have started to emerge.

From a purely engineering and manufacturing perspective, we already know exactly what Apple’s iPhone 6s and iPhone 6s Plus handsets are made of. The decision to build the hardware with higher-grade 7000 series aluminum was taken by Apple in an effort to give the hardware a more premium feel, as well as reduce the chance of last year’s bendgate scandal from happening again. But has it worked? What effect does the new aluminum have on the overall durability and strength of the new iPhone? 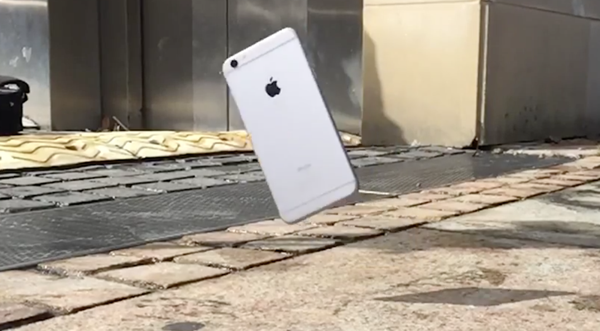 The video starts with an initial introduction and a quick discussion about the aforementioned 7000 series aluminum. Apple claims that the iPhone contains the strongest glass ever used on any mobile device. A Bold claim. In order to try and achieve more consistent drops, the iPhone 6s is dropped to the floor on its back from an approximate waist height from on top of a wooden block. Apart from a small scuff to the shell of the Rose Gold iPhone, there’s no damage whatsoever. The larger iPhone 6s Plus demonstrated the exact same ability to survive a drop from the same height.

Next up; a side drop of both devices to force the hardware to land on the concrete below on one of its smaller edges. Once again, there’s no major damage experienced to Apple’s hardware, apart from an expected dent mark around the headphone jack. Dropping the device face-down onto the glass is where the problems start to occur. Both the iPhone 6s and iPhone 6s Plus suffered from a shattered display on the first drop, but the screen does remain fully functional. The presenter of the video does note that the glass feels noticeably stronger than last year’s iPhone 6 and iPhone 6 Plus.

So, just what can we derive from this type of test? Pretty much the same as we can every year. It’s a consumer technology product that is designed to be as strong as possible, but is not designed to withstand purposeful acts of destruction. Common sense really.